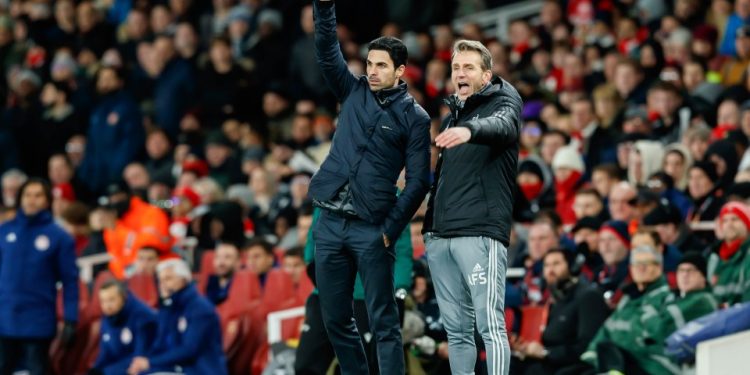 Gunners Boss Mikel Arteta will not be in attendance for the game after contracting COVID-19 again.

Nicknamed ‘AirPod Albert’ by supporters because he is often seen wearing the Apple product as he receives information from analysts, Stuivenberg will need all the help he can get when he comes up against the Champions.

Whilst this will be the first time he manages a side in the Premier League, the 51-year-old has had experience coaching several sides in the past and bringing through some top talent.

After his playing career was cut short in 1989 by a cruciate ligament injury, the Dutchman was given a role in Feyenoord’s academy.

He eventually became head of youth in 2001 and brought through former Arsenal and Manchester United striker Robin van Persie before being reunited with him during his spell at Old Trafford.

Stuivenberg spent two years with the Red Devils helping the club win an FA Cup before being leaving when Van Gaal was sacked by the Man United hierarchy.

When Arteta was appointed by Arsenal in December 2019, the Spaniard asked him to join the club having spent time together studying for their UEFA A coaching licenses in Cardiff with the Football Association of Wales.

The Dutchman continued in both roles until July 26, 2021 when he stepped down from his role with the national side.

With the coaching experience he has accumulated, Stuivenberg will be looking forward to leading his players out against Man City.

He will, though, face a tough task given that the visitors are on a ten-match winning run in the league.

You can listen to Arsenal vs Man City live on talkSPORT from 11am on Saturday, January 1.

Ukraine crisis: tense talks between US and Russia open in Geneva