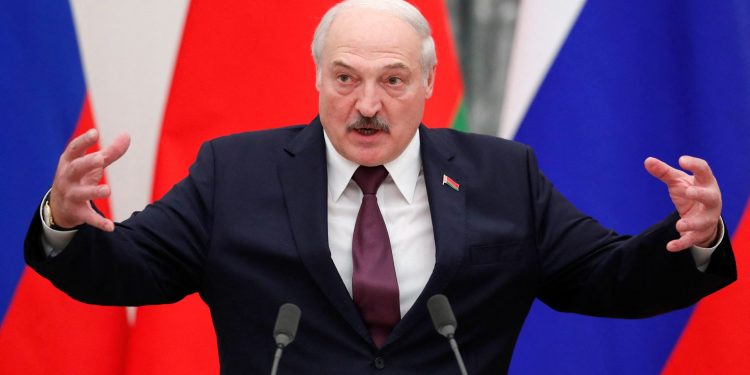 Belarusian strongman Alexander Lukashenko has ridden out a year of street protests, international condemnation and sanctions, and now he’s got a new plan to keep his grip on power for years to come.

A referendum on a new constitution, due to take place in February, is the centerpiece of his strategy. It’s leading to opposition calls to boycott or undermine that effort, but leaders are pessimistic that will stop Lukashenko.

He’s already cloaking the referendum in talk of patriotism and national defense.

“We need to defend our turf. With or without Lukashenko, this is your country; we have nurtured it over a quarter of a century and we should never give it away to anyone,” Lukashenko told a meeting of regional officials last week, according to the state-run Belta news agency.

Although the amendments to the constitution have not yet been published, Lukashenko has already made clear that he wants to create a governance system that’s quite different from that of a liberal democracy. The core part of the reforms appears to be aimed at handing more power to the Belarusian People’s Assembly, an advisory body made up of loyalists from government and industry. Those powers include the appointment of senior judges and the ability to initiate impeachment proceedings against the president.

“In general, this is the highest representative body. This is how it is conceived,” he said in a recent interview, underlining that whatever changes he has in mind, “in no case should a dual power be allowed! The head of state, the president, must remain the president; we must have a presidential republic. Otherwise, we will destroy the country.”

The idea is that he and other senior figures in the regime would shift to the assembly, allowing younger people to take top jobs. “A new generation is coming. It must rule the country,” he said, but then added a very important caveat: “But we must still see what is happening.”

He also urged law enforcement — the people who crushed opposition efforts to protest last year’s stolen presidential election — “not to relax” because the opposition would “keep attempting to disturb the situation” ahead of the referendum.

That’s exactly what the opposition hopes to do.

Pavel Latushko, an opposition leader living in exile in Poland, believes that the new constitution “is intended to cement Lukashenko’s power, giving him and members of his family life-long personal immunity from prosecution, as well as immunity to everyone who supported his crimes on the territory of Belarus.”

“We plan to overthrow Lukashenko’s scenario,” he told POLITICO. “We do not consider sitting at home an option. We urge all Belarusians to actively oppose this referendum.”

Opposition leaders are urging their supporters to invalidate ballots during the referendum.

Alexander Dobrovolski, a Vilnius-based senior adviser to Svetlana Tikhanovskaya, the opposition leader who may have won last year’s election and who is now in exile, said Belarusians “will not be offered a choice” in the referendum. “They will be offered either the existing constitution [which gives huge powers to Lukashenko], or a new constitution, which de facto keeps Lukashenko in power.

“This is a clear deception,” he said. “Lukashenko switching between different seats will not make the reason behind the crisis go away. The majority of voters in Belarus want new presidential elections … This is like having to choose between two variants of coronavirus — Delta and Omicron — neither is a good choice for your health.”

Despite their efforts to upend Lukashenko’s referendum plans, opposition leaders are cautious about whether their effort will succeed. The democratic opposition has been shattered, with hundreds of people in jail, many of whom have been sentenced to long prison terms. Leaders are either in prison or in exile, and it’s difficult to organize resistance to Lukashenko in the country.

“We expect that the campaign against the referendum will revitalize society. But if public activity is not enough [to restart protests], we will keep resisting anyway,” Dobrovolski said.

Will a Two-speed European Union Side-line the Visegrad Four?

‘Take from the hungry to feed the starving’: UN faces awful dilemma