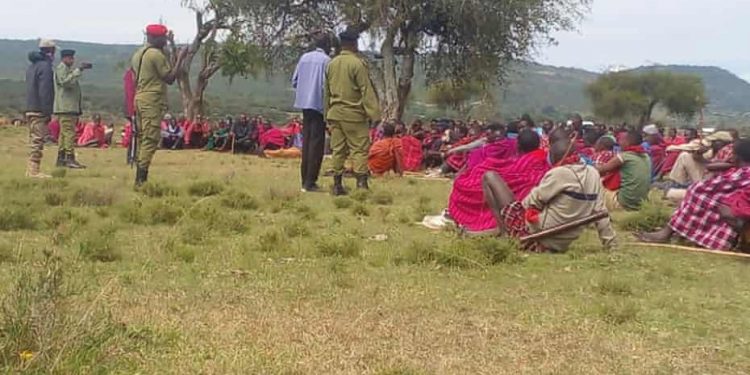 Ten Maasai leaders were detained and more than 30 people wounded during violent clashes with police in northern Tanzania on Friday, as they protested against eviction from their land to make way for a luxury game reserve.

One police officer was reportedly killed in the clashes and hundreds of people are in hiding after the protests in Loliondo, which borders Serengeti national park.

The protests began when police began to demarcate 1,500 sq kms (540 sq miles) of land to make way for the reserve, to be operated by a UAE-owned company. The Maasai regard this land as their home.

The leaders arrested last week have not been seen since they were detained. The NGO Pan-African Living Cultures Alliance said it plans to stage a mass protest on Wednesday unless they are released.

One member of the Maasai community, who declined to be named, said at 6am on Friday police fired “many bullets” at protesters. “They destroyed our boda-bodas [motorcycles], took our cattle and properties had been destroyed.

“Very many women have been beaten. There were so many women there, I think they are using women as a weapon.”

He said security forces went from house to house arresting people. “People are still being tracked by police, especially the educated, those with phones and evidence. Eight young men were taken away for putting photos on social media. We are under a lot of pressure.”

Those wounded in the clashes have reportedly had to cross over to Kenya to receive hospital treatment, since state medical care is being refused to land defenders in Tanzania. Three people reportedly remain in a serious condition.

A rights activist working with the Maasai, who wished to remain anonymous, said: “Thousands of Maasai from Loliondo are crossing the border, seeking refuge, especially women and kids. They’ve been sleeping in the forest.

“The victims can’t go to hospital in Tanzania – there’ll be arrested. Kenyan doctors, paramedics and nurses are taking care of those who crossed safely.”

Previous attempts to evict Maasai from the region have been thwarted after local and international pressure. But fears of a renewed attempt were raised in February when Tanzania’s tourism minister, Damas Ndumbaro, said the Maasai did not have a claim to their homeland. In April, community leaders sent letters to the UK and US governments and the EU, appealing for help.

Earlier this month, the Ministry of Natural Resources and Tourism announced that it wanted to classify more areas as game reserves.

The Tanzanian government has denied it is trying to evict anyone and said it was trying to conserve the area. It maintains Maasai will still have access to 2,500 sq km of land.

But Denis Moses Oleshangai, a Tanzanian human rights lawyer, said the government’s actions were “a crime against humanity” and called on the international community to intervene. “The government of Tanzania depends on aid from the west. I am asking countries not to fund Tanzania because it is using this money to terrorise people.”

Samwel Nangiria, a local Maasai community leader and the director of the Ngorongoro NGO Network, agreed. “The international community must hold our government to account,” he said. “This is brutal, they have used excessive force against Maasai who have lived alongside wildlife for a very long time. If this is not addressed, it will set a precedent and Maasai will be pushed off their land elsewhere.”

Malik Hassan Shafi, a spokesperson from the Tanzanian embassy in Washington DC, told the Guardian: “The government has not burned any house nor attacked anyone in Loliondo.

“We want to assure you that the government of the United Republic of Tanzania has never and will never hurt its own people it has sworn to protect. Those are propaganda instigated by people with malicious intent against the government.”

He said the “exercise” to mark off the area had been “mutually agreed” by the government and local people.

All Out: The campaign against homophobia in Poland