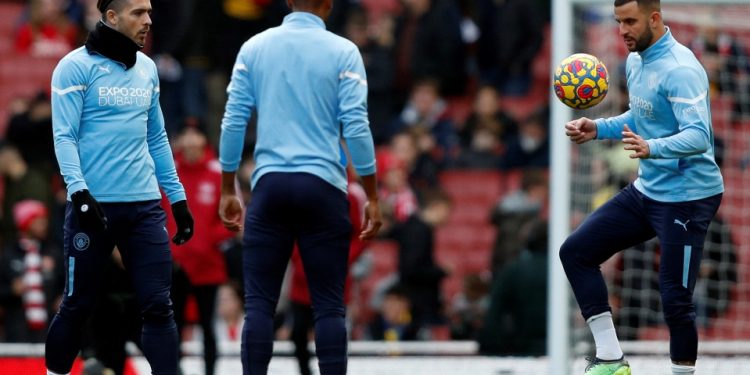 Manchester City star Jack Grealish is too good not be a hit after his £100million summer transfer – but he might need to learn a thing or two from David Beckham first.

The former Aston Villa man was left on the bench as his side beat Arsenal in the Premier League amidst his continuing poor form.

There were big expectations on the summer signing but, while he’s still showing individual talent, he’s often looked out of sync with his teammates.

In the Premier League, Grealish has only managed two goals and two assists in 14 appearances, while he only managed to play two full 90 minutes in December in five games.

As well as that, indiscipline off the pitch has pockmarked the early stages of his Man City career.

He was then dropped to the bench for the match with Arsenal but he is still being backed to realise his potential.

Former Premier League defender Alvin Martin told talkSPORT: “I think he’s in the same situation as Raheem Sterling was when he arrived and you look what happened. There were people doubting him, he didn’t score enough goals, and his end product wasn’t there.

“Look at what he was then and what he is now, I think the same will happen with Grealish.

“I think Grealish is really talented but he needs to hone his talent. He needs to understand the game more, the pressing, the philosophy of how the game is played, when to sacrifice yourself for the team.

“All those things take time to get to but he will get there, he’s got too much talent not to.

“I think Jack is a wannabe celebrity, to a certain extent, as well. That might hamper him a little because it gets a little bit more complicated then.

“If you’re on the front pages and the back pages there are going to be incidents and how Pep Guardiola views that, I don’t know.

“Sir Alex had it with David Beckham. David Beckham had this massive celebrity that surrounded him but a lot of the time he was able to focus on the football whenever he needed to. That’s a special talent in itself.

“He’s still growing up, he’s still maturing. If he does get married and settles down that could change him. That happens to a lot of players.”

And former Aston Villa forward Tony Cascarino also agrees that Grealish could explode into life once manager Guardiola has had a full campaign with him.

He told the Weekend Sports Breakfast: “At Villa he was the main man and everything went through Jack, and now I feel Jack’s a little bit flicky. He keeps the ball and he does little touches.

“It hasn’t quite worked out for him to be the main man which, maybe he will be that next season, maybe he can find his way because obviously Pep thought a lot of him to spend so much money.

“He hasn’t quite been as pivotal as he had to be at Villa and there are so many other players that can do what Jack can do, and more, [at Man City].

“I think Jack’s actually realised he might be a £100m player but there are four or five players at that club who are better than him.”

And, rather than learning from United legend Beckham, Cascarino believes his own City teammates can show him the way forward.

He added: “So many City players can be versatile. Like Sterling, I’ve seen Sterling play on the right and come in on his left foot all the time. I’ve seen Bernardo Silva come central and then sometimes go into forward areas as a No.10. I’ve seen [Kevin] De Bruyne float around in many different positions.

“Jack hasn’t quite got that in his game. Will Jack get that? Well, Pep improves nearly everyone he has had so he has got a chance to be a far more complete player, I think, by the end of the season.

“I think expect Jack to be the kind of player Pep wants him to be next season, not so much this season.”