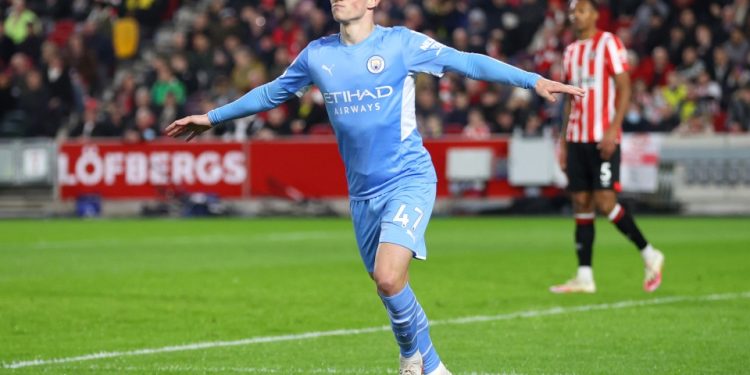 Manchester City rounded off a spectacular 2021 by moving eight points clear at the top of the Premier League with a 1-0 win over Brentford this week.

Kevin De Bruyne produced a stunning assist for Phil Foden to score City’s only goal as both Liverpool and Chelsea failed to win.

City have been incredible throughout 2021 and if they weren’t beaten by Chelsea in the Champions League final, there’d be a case to suggest they would be one of the greatest teams ever.

They have broken multiple records throughout the year, where they scooped the Premier League and sealed their fourth successive EFL Cup.

Pep Guardiola’s side are now heavy favourites to retain their title next year following their impressive start to the new campaign.

But what records have they broken over the course of a dominant calendar year? talkSPORT.com has a deeper look…

City have already set a new record of top-flight wins (36) in a calendar year, eclipsing Liverpool’s 33 haul under Bob Paisley in 1982.

The champions beat the Reds’ long-standing achievement with their 4-0 win over Newcastle earlier this month, before beating Leicester and Brentford.

Most goals scored in a Premier League season

Wednesday’s win over the Bees was City’s 19th away win in the league, which is another record.

Guardiola’s men have closed out 2021 by winning two more than Bill Nicholson’s league and FA Cup double-winning Tottenham side of 1960-61.

Manchester City celebrate during a win away at LiverpoolGetty Images – Getty

City currently boast the record for the most top-flight goals scored in a season after banging in 106 during their 2017-18 season.

But they’ve topped that over the calendar year 2021 having notched a staggering 113 goals following Foden’s first-half strike this week.

City have played three more games than Liverpool but have bagged 32 more than the Reds who boast top goalscorer Mohamed Salah.

Pep Guardiola has overseen a domestic dynasty in charge of CityGetty

What has been said?

Man City look unbeatable and have been tipped to win the Premier League title by TEN points by Tony Cascarino.

Speaking on the Weekend Sports Breakfast, the talkSPORT pundit said: “I want my former club Chelsea to have some sort of involvement, and I want the team I supported as boy, Liverpool, to hang on to Man City’s coat tails – but I think that’s about as good as it’s going to get.

“If Liverpool finish above City, I think it would be their biggest achievement in recent history, because City are an exceptional team.

“Seven straight wins. They’ve won nine of the last ten and the only game they lost was the one they didn’t need anything from, RB Leipzig away in the Champions League.

“If you’ve got Phil Foden on form, Bernardo Silva on form, Kevin De Bruyne coming back from injury and he starts doing what he can do – and we all know what that is – it’s pretty devastating.

“My personal feeling, and I might be way out here, but I think Man City will win it by ten points.

“I think it’ll be a major achievement if Liverpool can even keep pace with them, because I just can’t see Man City going into games and losing.”