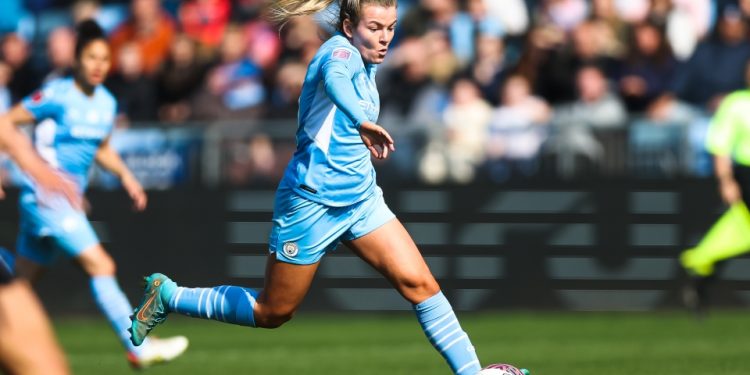 But the women’s side have a homegrown sensation of their own, who is ready to take Euro 2022 by storm with the Lionesses this summer after another fantastic season in the Women’s Super League.

Lauren Hemp was the Manchester side’s top goalscorer last season, having netted 21 goals in all competitions, as they won the League Cup, finished runners-up in the FA Cup, and third in the Women’s Super League.

She joined them from Bristol City in 2018 at just 17 years old after being named PFA Women’s Young Player of the Year.

And it was something that she needed to get used to winning, after picking up the prize in three of the next four seasons, which included the most recent edition of the award.

Hopefully she has a big mantlepiece because the honours didn’t stop there, having been named in the last two PFA WSL Team of the Years, alongside England teammates Alex Greenwood, Millie Bright, and Leah Williamson.

And, having been named in hypothetical XIs with those players, she is set to play alongside them in Sarina Wiegman’s England side for real this summer, hoping to win another trophy to squeeze on her fireplace.

She had already made her mark at international level, helping the Lionesses’ Under-20s to third at the 2018 World Cup and captaining the Under-17s at the Euros the year before.

Hemp scored her first goal for England last year and – just like buses from the capital – she waited ages for one, and then four came along at once!

She played a big part in England’s 20-0 demolition of Latvia, which was a national record win, in November 2021 at the Keepmoat Stadium in Doncaster.

Her pace, dribbling ability, and eye for a goal with her wand of a left foot saw her named by UEFA as one of the ten most promising young players in Europe in 2020.

Despite this, Hemp knows that she still needs to improve – and her international boss is helping her to do that.

Speaking exclusively to talkSPORT last year, she said: “Sarina has been amazing, especially in the camps I’ve had with her. She’s taught me so much and I absorb everything she tells me. She’s been an amazing coach and I look forward to, hopefully, continuing that throughout the season.

Hemp told talkSPORT she’s already learned so much from Wiegmangetty

“She’s very detailed in her coaching. She’s got a way she wants us to play and how to execute it and there’s so much detail that goes into our work. She’s always watching and it’s nice when we come away from sessions, she’s always got things for me to work on.

“I need that as a player, especially as I’m not the final product and I know there’s still so much more I can improve on. I like having that after every session and having things to work on and [I can] go back to my club and improve ready to come back next time. She’s an unbelievable coach and I know she will, hopefully, take the England team to success.”

The duo will team up again this summer for the European Championship, where they will hope to go one better than the men’s team, who were runners-up last year.

Can she do what fellow Man City stars Grealish, Foden, and Sterling failed to do at Wembley Stadium?

Every one of England’s Euro 2022 game will be live on talkSPORT, beginning on 6 July at 8pm

IMF revises downwards its growth predictions for much of emerging Europe