Martin Odegaard is ‘making no.10 role his own’ because of Alexandre Lacazette and Arsenal may be forced to rethink transfer for out-of-contract striker next summer 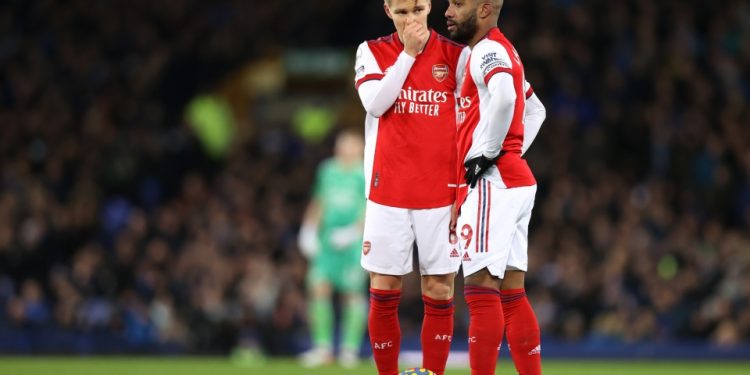 Alexandre Lacazette’s brilliance in spearheading Arsenal’s frontline is ‘getting the best out of Martin Odegaard’ and could force the Gunners into a transfer rethink this summer.

Lacazette has breathed a new lease of life into his Arsenal career in recent times, playing crucial roles in victories Southampton, West Ham and Leeds.

Lacazette and Odegaard have been superb for Arsenal in recent weeksGETTY

Former Arsenal midfielder Perry Groves believes the Frenchman’s menacing displays up top are allowing the youngsters around him to thrive – and none more so than Martin Odegaard.

Lacazette is a leading contender to take over the captaincy from axed skipper Pierre-Emerick Aubameyang, but the Arsenal board will need to offer him a new contract with his current deal expiring at the end of the season.

And Groves, who spent six years at Arsenal from 1986, is in no doubt that Lacazette’s ability to lead the lead the line has allowed Odegaard to play to his best level in recent weeks.

“I was actually worried about Odegaard at first because you could tell he’s an unbelievably talented boy at first, but he wasn’t dominating games,” Groves told talkSPORT.

Odegaard is enjoying his best spell in the Gunners shirtGETTY

“We used to watch [Mesut] Ozil and he used to frustrate at times. We wanted him to go and take the game by the scruff of the neck and be dominant in that No.10 position

“Odegaard is just starting to make that role his own, he’s grabbing goals and assists and with Lacazette it’s giving him that physical presence and a base to play from and he’s got pace from [Bukayo] Saka and [Gabriel] Martinelli on both sides with him.”

Despite winning three matches on the bounce in the Premier League, Groves fears the top four will be hugely difficult to achieve for Arsenal given the quality of rivals Manchester United’s squad.

“They need help,” he added. “I’ve watched them in games and when there’s a period in games that’s not going your way, when you’re under the cosh, you’ve got to be able to get through that period.

“It’s a ten, 15 minute period where you knuckle down when you don’t concede.

“Watching Arsenal play when we do go through that period in games, it looks like we’re going to concede

“I can’t seem him doing much business in January because he knows this is his team now.

“Let’s be honest if Ralf Rangnick is half the manager that everybody says he is at Manchester United, if he doesn’t get them fourth with their quality then he should be nowhere near there at the end of the season.”

A ‘6-point plan’ to save Europe’s gas market