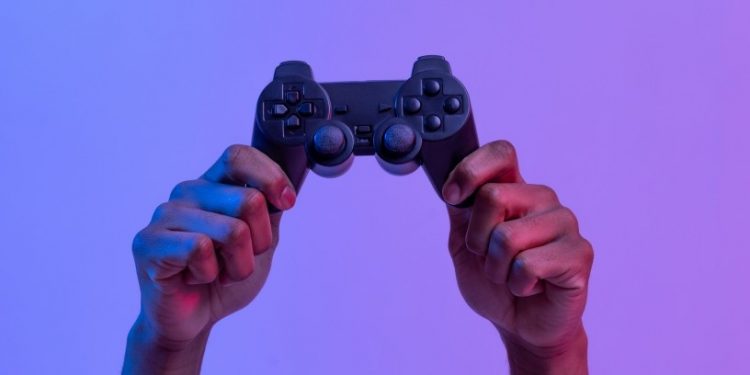 In October, the All Black Apex event featured about 60 streamers and raised more than $1,000 for charity. It was sponsored by EA, marking the first time that the publisher would get involved with something so explicitly Black-focused. This wasn’t lost on Annabel “Anzy” Ashalley-Anthony of Melanin Gamers, a squad of streamers, organizers, and activists who organized the event.

“Lots of places prefer to use POC as a catch-all for people of color, but Black people tend to be pushed to the bottom of that group,” Ashalley-Anthony tells me, mentioning that she explicitly wanted this to be Black-focused and that she was grateful that her contacts at EA were receptive to her vision.

“There shouldn’t be different types of Apex players” Ashalley-Anthony says. But the social hierarchy of Apex streaming, and streaming in general, creates an environment where Black streamers can’t rely on getting opportunities off the strength of their talent alone. They are underexposed for a variety of reasons, and the best way to combat that, in Melanin Gamers’ minds, is to organize.

That effort to organize and protect Black streamers comes on the heels of a year where harassment towards the community was as widespread as ever. Hate campaigns on Twitch — waged by using a combination of automated bots, the newly-minted tags that help identify marginalized creators who are on air, and Twitch’s raid feature — has left many Black chat channels helpless to endless floods of racist hate speech. Tools were eventually created to help streamers fight back, but not before a one-day boycott of the platform took place in protest of the company’s apparent sluggishness to take action.

Melanin Gamers were victims of these raids themselves — “It did happen a few times but we were able to catch it,” Ashalley-Anthony says. “We had a hate raid on our main channel but since we have such great MOD’s and they were briefed about what to do we shut it down pretty quickly.”

Ashalley-Anthony is the only full time member of Melanin Gamers, but she’s supported by a team of folks with diverse backgrounds. Her brother, Alan Ashalley-Anthony, co-founded the organization and uses his paralegal background to handle the paperwork and do research and fact-checking when necessary. Don “Dandy” Shand handles social media and video production. Laura “Honey” Wilson covers digital marketing, while Koye John-Charles handles their illustrations. Together, the team is the beating heart of an ever-growing online family of content creators.

The Melanin Gamers community stretches across continents, with about 70 percent of associated members being U.S.-based. This is largely because many of their community events and networking meet-ups have been online, especially over the past two pandemic years, where video calls and digital game events have been the norm. That, and Americans, Ashalley-Anthony finds, are motivated by their mission statement. “It’s a cultural thing, I think,” she posits. “Americans of color are good at being loud about injustice.”

Their international presence doesn’t stop at just who reps the brand on streams. Melanin Gamers organizes live community meetups and networking events across the U.K. Though it is largely in the form of free tournaments and other sorts of branded meetups, the squad often uses these events as a gateway to introduce conversations about important, non game-related causes like the gender pay gap, anti-racism, and unconscious bias, partnering with local London organizations when they can to spread an activist message.

One of their most ambitious international projects took place in September, when Ashalley-Anthony and her team went to Ghana for two weeks to hold panels and gaming events for more than 100 young people hoping to break into streaming and online culture in general.

“Many of them don’t associate streaming or social media with careers,” she explains. “They see it as a distraction or a hobby, but not a route to success.”

While the future is uncertain for any event promoter in the face of COVID-19, Ashalley-Anthony is confident that live Melanin Gamer events will come back stronger than ever and just as ambitious — “We have a lot of events in the pipeline specifically going into schools and colleges to get the youth interested in a career in the tech/gaming industry,” she says. Until then, their online events continue to proceed regularly, as well as consistent Twitch streams from the team and their flourishing host of associated content creators.

Year in review 2021: The present and future of energy storage with Form Energy, Key Capture Energy