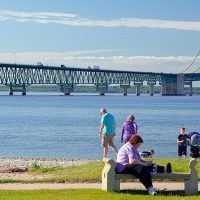 A Michigan regulatory panel said Thursday it needs more information about safety risks before it can rule on Calgary-based Enbridge Energy’s plan to extend the Line 5 pipeline through a tunnel beneath the Straits of Mackinac.

The state Public Service Commission voted 3-0 to seek further details about the potential for explosions and fires involving electrical equipment during construction of the tunnel beneath the waterway linking two of the Great Lakes, The Canadian Press reports.

The commission’s approval would be required for Enbridge to replace two existing Line 5 pipes in the straits, which connect Lake Huron and Lake Michigan, with a new segment that would run through the proposed underground tunnel.

“This has been an extensive process,” said PSC Chair Dan Scripps. “We want to make sure that we get it right.”

Thursday’s ruling “adds more delay and uncertainty for a controversial project that Enbridge had originally hoped to begin last year,” Bridge Michigan writes. “The decision came as a surprise for Line 5 supporters and foes, who had been bracing for commissioners to either grant or deny the permit after years of deliberations. Multiple people spoke out against the project at the meeting, while tunnel supporters showed up clad in blue t-shirts emblazoned with ‘Build the Great Lakes Tunnel’.”

“I’m so thankful that this didn’t get approved today,” audience member Jody Daniels told the commissioners. “Thank you for that. But you need to seriously understand that even building the tunnel would bring devastation.”

Enbridge and the state of Michigan are mired in legal battles over Line 5, CP says. The 69-year-old underground pipeline carries Canadian oil and natural gas liquids used for propane through northern Michigan and Wisconsin to refineries in Sarnia, Ontario.

A four-mile/6.4-kilometre section divides into dual pipes that cross the bottom of the straits.

Enbridge is defying Michigan Gov. Gretchen Whitmer’s 2020 order to shut down the line, a move long sought by environmental groups and Native American tribes who fear a rupture would devastate the lakes. The company says the line is in good condition and contends in a federal lawsuit that the Democratic governor doesn’t have the jurisdiction to shut it down.

Enbridge reached a deal with former Republican Gov. Rick Snyder in 2018 to build the US$500-million tunnel, CP recalls. Enbridge has obtained permits from the Michigan Department of Environment, Great Lakes and Energy and awaits word from the U.S. Army Corps of Engineers as well as the Public Service Commission.

The commission said last year it would not pass judgment on whether the entire 645-mile/1,038-kilometre line should continue operating, focusing instead on the underwater section.

Its three members are Whitmer appointees. Scripps and Tremaine Phillips are Democrats, while Katherine Peretick is an independent.

In its order Thursday, the commission said testimony, exhibits, and briefings included too little about tunnel engineering and hazards. Also lacking is information about safety and maintenance of the dual pipelines, “including leak detection systems and shutdown procedures,” the order said.

Scripps told CP that Enbridge had pegged the likelihood of an oil release from the tunnel pipe as “one in a million.” The commission wants to know how the figure was calculated, he said, as well as steps to eliminate even that possibility. In a statement, Enbridge said it already had provided “extensive” material on those matters but would answer further questions.

“The engineering and design of the tunnel has been developed in accordance with the tunnel agreement entered with the state, and in close coordination with the Mackinac Straits Corridor Authority to ensure its safety and design life,” the company said.

The corridor authority was created under Snyder to oversee building and operation of the tunnel.

The commission’s decision was the latest of many delays for the tunnel, which the company originally pledged to complete by 2024. The Army Corps is conducting a lengthy environmental impact study.

Enbridge said it remains committed to the project. The Great Lakes Michigan Jobs Coalition, which represents industry and labor groups, urged the commission to “get back to work, move the tunnel project forward and protect tens of thousands of Michigan jobs.”

This main body of this report was first published by the Canadian Press on July 7, 2022.

Bank of Spain governor pushes back on inflation warnings