Most Will Have to Dream of a White Christmas 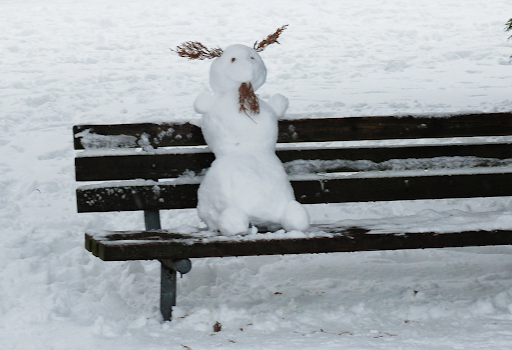 I have some disappointing news for many living over the western Washington lowlands.

Saturday, December will not bring extensive lowland snow on the ground.

On the other hand, many of you will enjoy seeing snowflakes falling out of the sky, which coupled with a rendition of Irving Berlin’s classic music and some hot chocolate, might be enough.

Not this year.  Picture by Steve Voghut

Large amounts of snow are expected in the mountains, so snow recreation will be excellent and close.

The temperatures during the next few days will be marginal for snow near sea level, which is often the case in our region.

In addition, the ground temperatures are relatively warm, as illustrated by the current soil temperatures from the WSU AgWeather network, which are in the low 40s in the west and mid to upper 30s over the Columbia Basin (see below).

The distinction between snowfall (amount of snow falling out of the sky) and snow depth is an important one, with snow depth often being MUCH less than snowfall.

First, in marginal situations, the snow is already melting before it hits the ground, with above-freezing air temperatures within the lowest few thousand feet.  This will be the case during the next few days.
Second, light to moderate snowfall is melted by the warm surface.  This will happen as well.
Another issue is model resolution.  The waters of Puget Sound and the Georgia and Juan de Fuca straits are relatively warm (around 50F).  Furthermore, these water bodies are relatively narrow…so narrow that many models do not have the resolution to include their warming properties in the forecasts.
In addition, the lack of resolution in global models, particularly those used in global ensemble forecasts, causes surrounding terrain to “spread out” into the lowlands, producing colder surface temperatures and more snow than is reasonable.
The Christmas 2021 Situation
The latest UW WRF model forecast is out, with the snowfall accumulation through 4 PM Saturday shown below.  This is a relatively high-resolution model (the distance between the grid points is 4 km).  Lots of snowfall in the mountains (1-2 feet) and light snow over the lowlands (under 1.5 inches) and nearly nothing near the water.
Quite a bit of snow near Spokane but nothing in the Tri-Cities.

But now let me show you the snow accumulation (snow depth) on the ground over western Washington predicted by the same modeling system for the same period.
Virtually nothing over the lowlands, with the exception around Bellingham and San Juans, where cold Fraser River outflow helps maintain snow accumulation.

Eastern Washington snow depths through 4 PM Saturday are more extensive, with Spokane certainly enjoying a snow-covered landscape. A colder environment, isolated from the warm water of the western side.

The big issue is still the unusual cold that will move into the region on Sunday through Wednesday.  I think the models are having a problem with the event, for reasons I won’t get into here, but lows of 5-10F in the western side of the state still appear viable.

Swearing is good for you: Elsewhere in emerging Europe

The stranded babies of Kyiv: Elsewhere in emerging Europe