Nature’s GPS: how animals use the natural world to perform extraordinary feats of navigation 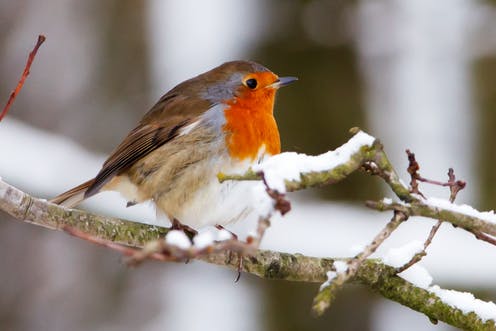 Tiny birds like robins are able to use the Earth’s magnetic field to navigate. Pxhere

At Christmas, thousands of greetings cards feature the iconic winter plumage of the robin. But not all the robins you might find in your backyard are permanent natives to your country. In the UK, for example, some will have migrated from Germany and Russia, and like millions of other animals all over the world, will return back to their breeding grounds next spring. This ebb and flow of birds, mammals, fish and insects is a key part of the Earth’s biodiversity.

Migration is a challenging strategy. For small animals like songbirds to be able to return from Africa or southern Europe to areas where they can successfully breed, they need to be able to repeatedly navigate to precisely the same place. How they do this is a question that has vexed scientists for over 60 years.

But recent evidence is shedding light on how tiny animals – with correspondingly tiny brains – can cross mountains, oceans and deserts without getting lost.

It seems that birds use external cues available in their environment, like the stars and the Earth’s magnetic field, to provide them with the equivalent of a map and a compass. But how they combine these cues is only now starting to become clear.

Our research group’s recent paper focuses on how reed warblers, a small Eurasian songbird, navigate. First, we disrupted the birds’ ability to sense the Earth’s magnetic field by attaching a small magnet to their forehead.

The reed warbler is one of many birds that use the Earth’s magnetic field to navigate. Gary Tate/Wikimedia

Like a careful engineer, the evolutionary process of natural selection has built in a fail-safe to birds’ navigation systems, making sure there are backup orientation devices available for when the skies are cloudy.

Another study by our research group has shown how these same reed warblers can work out exactly where they are when migrating, as well as how they deal with being blown off course or needing to detour around barriers like the Alps.

This is an example of a funnel used to test birds’ orientation. Birds’ feet leave ink marks on the funnel paper when taking off, indicating their flight direction. L Shyamal/Wikipedia

We put reed warblers in an artificial magnetic field that matched the natural magnetic field of a place far northwest of the birds’ migration route. We then tested their sense of direction in an orientation cage – a small funnel 30cm in diameter that allows us to measure the direction a bird wants to take off in by analysing where it hops inside the cage.

We found that when placed in this artificial field, birds changed their orientation from southeast to southwest, suggesting they had recognised the magnetic field signature as foreign and were trying to get back to their route.

We call this technique “virtual displacement”, as the bird itself never actually leaves the site where it’s captured for testing. It’s become a new tool for understanding how animals sense and use the Earth’s magnetic field for navigation.

What was even more remarkable was that the artificial magnetic field we created is not one that the birds would have previously encountered on their migrations. That means they weren’t reacting to magnetic field cues that they had learned. Instead, the birds had used their instinctive awareness of how the Earth’s magnetic field changes with distance to work out that they were northwest of their route. Not bad for those tiny bird brains.

Clearly, both the starfield and the magnetic field are important cues for birds to migrate. But human activity has the potential to disrupt these. Artificial light at night from cities reduces visibility of the stars and moon. In other animals, such as dung beetles and sandhoppers, this has been shown to negatively affect navigation abilities.

What’s more, artificial electromagnetic signals – such as those coming from radio towers or even from electric currents that power everyday devices such as kettles – can also confuse birds’ ability to detect the natural magnetic field. We may be giving birds a double dose of pollution that even their fail-safe systems can’t overcome.

We don’t fully understand how these pollutants affect migratory birds yet, but as we come to understand more about nature’s GPS, it’s vital to understand the risks human activity poses to this remarkable system of navigation.