New evidence of Belgian complicity in 1961 killing of Burundian PM 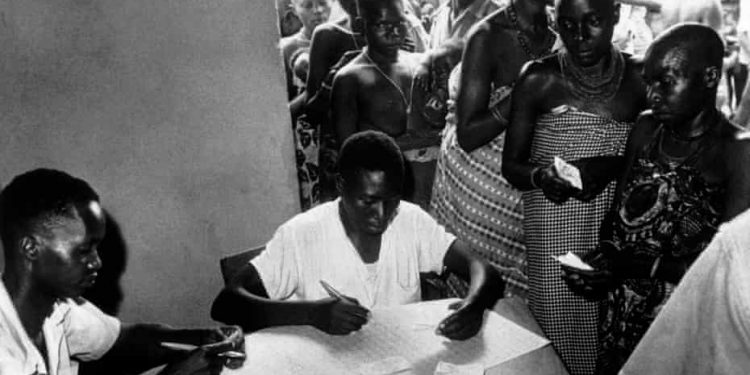 A popular prime minister of Burundi, Prince Louis Rwagasore, was shot dead just over 60 years ago with the complicity of Belgium, the departing colonial power, a researcher has claimed.

The Belgian state has an “overwhelming responsibility” for the assassination of Rwagasore, according to Ludo De Witte, a Flemish sociologist who has spent five years investigating the killing. His previous work on the assassination of Congo’s first elected prime minister, Patrice Lumumba, led to a parliamentary inquiry that concluded Belgium had a “moral responsibility” for the death of the charismatic leader.

His new book, Murder in Burundi, explores unseen documents from archives in Brussels and London that expose Belgium’s hand in Rwagasore’s assassination, an event that shattered peace between ethnic groups, leading to decades of war and instability in the landlocked central African country.

The story unfolds on the terrace of the restaurant Tanganyika in Bujumbura on Friday 13 October 1961, where Rwagasore was dining with ministers and allies. The 29-year-old son of one of Burundi’s last kings had been swept to power barely three weeks earlier in a landslide victory that had stunned the Belgian elite.

A conservative aristocrat and a democrat with a knack for political organising, Rwagasore wanted to unite Burundi’s different ethnic groups – the Hutus, Tutsi and Gangwas – in true independence from Belgium, the colonial power since 1918.

His plans were never realised. He had been prime minister for only 16 days when he was shot. The killer and his accomplices were quickly caught and tried. The man who pulled the trigger, Jean Kageorgis, a Greek national, was executed on 30 June 1962, the day before Burundi’s independence. Five accomplices were put to death six months later.

De Witte argues that the role of the Belgian state was never properly examined, not by the Belgian colonial court, the newly independent government of Burundi, or the United Nations, which all conducted inquiries into the killing.

De Witte sees differences in the culpability of the Belgian elite in the two assassinations he has investigated. In the case of Lumumba, killed also in 1961, the Belgian elite had “a direct and concrete responsibility in the assassination”, De Witte said. In the case of Rwagasore, events were orchestrated by Belgian officials in Burundi while Brussels turned a blind eye.

Rwagasore’s life was in danger after his Uprona party won a crushing victory over the Christian Democrat party (CDC), which was seen as more friendly to Belgian interests. Two days after the Uprona landslide, Roberto Régnier, the Belgian resident (governor), convened a crisis meeting of senior Belgian officials and CDC allies, where he delivered a chilling message.

“Rwagasore must be killed,” he said. His words were taken as an invitation by the CDC.

Régnier’s words were confirmed by four participants in a 1962 investigation by the crown prosecutor of Brussels. But that report was never published and was left gathering dust until De Witte came across it.

The first clue of the report’s existence was found in a dispatch from Britain’s then ambassador to Burundi, James Murray. Writing in 1962, Murray told London that some senior Belgians had had “an almost pathological hatred” of Rwagasore, who they believed would harm Belgian-Burundian relations. He recalled Régnier’s “words which go very far in the direction of incitement to murder”.

Also accused is one of Belgium’s most admired diplomats, Paul-Henri Spaak, the then foreign minister who is now celebrated as a founding father of the European project, who De Witte believes turned a blind eye to what was happening. “Spaak knew that Régnier and his aides were on a war footing with Rwagasore, that they were rebelling against the United Nations decision to order free elections with the participation of Rwagasore,” he says.

He also describes how King Baudouin, one of Belgium’s most popular monarchs, sought to help the assassins. He “moved heaven and earth” to commute the death sentence of the assassin to imprisonment. While some might suggest Baudouin was motivated by opposition to the death penalty, De Witte contends that the young king was heavily influenced by the ultra-conservative Catholic circle at the palace that took a pitiless attitude to anyone advocating real independence.

But the picture remains incomplete. When De Witte went to examine Spaak’s archive, he found only a few document relating to Burundi for 1961. And a document he found in the African Archives in 2013 had disappeared when he went to look at it again a few years later, he says.

The sources may be new but the conclusions do not surprise Burundian-Belgians. “We have known for a long time there was a crime committed by the Belgian state,” said Libérat Ntibashirakandi, a mathematics professor in Brussels who founded the Burundian Diaspora of Belgium group. “The book brings new elements of proof that Belgium was implicated in this assassination.”

Belgian parliamentarians have been calling for greater access to archives since the inquiry into Lumumba’s death nearly 20 years ago. Experts repeated the “paramount importance” of declassifying the archives in October 2021 when a special commission handed over a report examining Belgium’s colonial past in Congo, Rwanda and Burundi, a project triggered by Black Lives Matter protests across Belgium. The experts acknowledged that their 689-page report paid “limited attention” to Rwanda and Burundi and called for further investigation into both countries, including Rwagasore’s assassination.

After two decades studying the darkest pages of Belgium’s history, De Witte is not optimistic the commission will change much. “Among the Belgian elite there is a reticence, a real distance to confront the reality, the destructive consequences of colonisation and decolonisation,” he says.

A spokesperson for Belgium’s foreign ministry did not respond directly to the charges in the book, but said: “The debate over historical reality is never over. It is perfectly legitimate, even necessary and desirable, that the historic colonial project be treated in a critical manner.” The spokesperson said the government was waiting on recommendations from the special parliamentary commission on colonisation before taking another position.

Ntibashirakandi said the Belgian federal parliament needed to investigate the murder of Rwagasore, whom he sees as national hero who could have led Burundi to a very different future.

“It’s important for Burundi to know the truth and for all of Belgium to recognise the mistakes of the past.”

Postcard from Poznań (with kids)

European Diversity Month: DIGI launches the campaign ”Together we are DIGI. #DigiPeople”