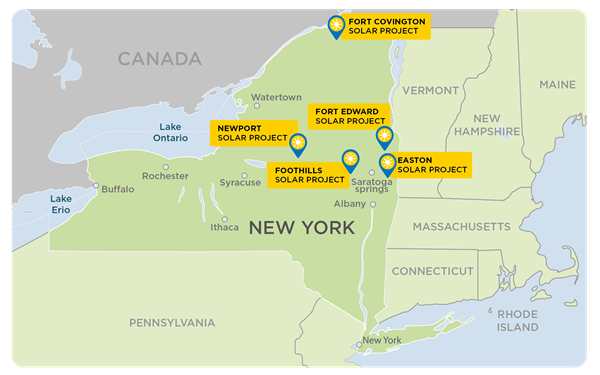 A map of Boralex’s five winning solar projects, one of which – Fort Covington – is co-located with storage. Image: Boralex.

The awards represent the state’s largest land-based procurement of renewable energy to-date, first covered by Energy-Storage.news‘ sister site PV Tech. The 22 projects will require US$2.7 billion in investment and some or all should be online by 2025.

Winning co-located projects from developers EDF Renewables (three) and Boralex (one) account for 85% of the 159MW of awarded BESS capacity, with ReneSola Power and Northland Power also adding storage onto their winning solar projects.

Columbia and Ridge View are also the largest winning solar projects by power, with 350MWac each, and Rich Road’s 250MWac brings EDF’s total contribution to 950MW, 40% of the 2,408MW awarded.

Boralex is pairing its 250MW Fort Covington Solar Farm with a 77MW/308MWh (four hours) BESS, in Suffolk County, while its four other winning projects are standalone solar: all five total 540MW of solar power.

EDF has not revealed the duration/MWh of its three BESS projects. Though this varies greatly in the state of New York, it may be trending towards four hours with Boralex’s winning tender and a Summit Ridge project announced last week both opting for it. And in April, the New York Power Authority (NYPA) began a process of adapting fossil fuel sites to be replaced with four-hour BESS units.

“Today’s investments will put us on a path to making New York a greener place to live while also creating new jobs and spurring economic development,” governor Kathy Hochul said. “These projects will allow us to not just meet but exceed our goal of obtaining 70 percent of our electricity from renewable resources (by 2030) and will further cement New York as a national leader in the fight against climate change.”

The contracts for the 22 projects include an index REC (renewable energy certificate) structure which will help cushion electricity consumers in the state against spikes in energy prices. The weighted-average all-in development cost of the projects amounts to $63.08 per megawatt-hour.