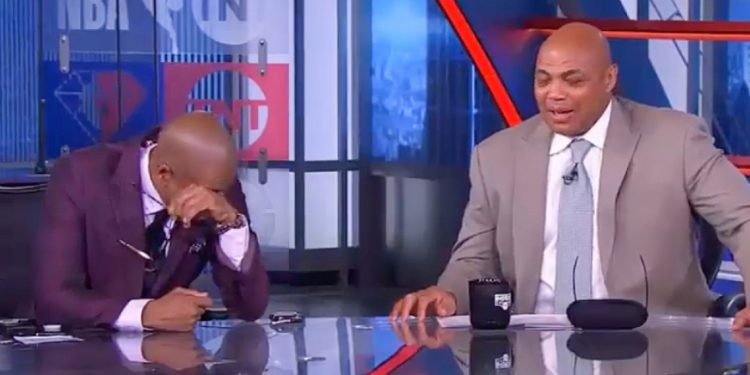 The Minnesota Timberwolves punched their ticket to the NBA Playoffs on Tuesday night with a thrilling fourth quarter comeback against the Clippers, led by Anthony Edwards, D’Angelo Russell, and Patrick Beverley.

The game, fittingly, ended with Beverley hustling an offensive rebound on a missed free throw with the Wolves up five, and he ran to the corner and launched the ball in the air, starting a massive celebration in Minnesota. Beverley jumped on the scorers table and fired his jersey into the crowd, going absolutely wild as the Wolves reached the playoffs for the first time since 2018. As TNT cut back to the Atlanta studios, the Inside the NBA crew couldn’t keep their composure when discussing the celebration in Minnesota, as Shaq, Chuck, Kenny, and even Ernie couldn’t help but poke some fun at how hard Minnesota was celebrating their play-in win.

“We need ‘One Shining Moment'”

Inside the NBA crew reacts to the Timberwolves’ celebration after clinching the 7th seed. pic.twitter.com/kMkhQBhKkN

They would then put “We Are The Champions” over the video of the celebration, per Shaq’s request, sending them into hysterics again, and later gave them their own “One Shining Moment.”

‘Inside the NBA’ gave the T-Wolves celebration the ‘One Shining Moment’ treatment.

The Timberwolves absolutely should enjoy the win and no one in the Target Center wants to hear about them celebrating too hard — and they shouldn’t. However, it was the exact type of moment that is perfect for the Inside crew to have some fun with. The best part is that, usually, it’s Shaq and Chuck leading the way, but this time Kenny was the one who was laughing the most and Ernie even got some jokes in about it all being a bit much.

The Wolves will have to bring themselves back down to earth in the next few days and get ready for what should be a highly entertaining series against the Grizzlies, starting on Saturday.