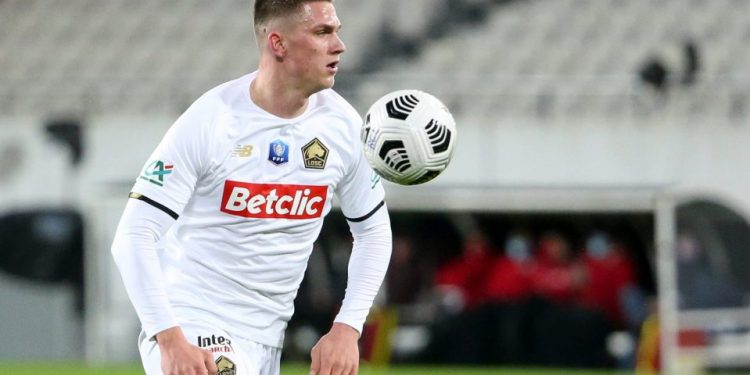 Newcastle are lining up a third bid for defender Sven Botman, which if accepted would see them break their record transfer for a player, talkSPORT understands.

It’s reported that Botman’s club Lille have rejected two bids already for the Dutch defender, despite the player appearing keen on a move to the north east.

Botman, 21, is understood to be liking social media posts linking him with NewcastleGetty

And talkSPORT’s football correspondent Alex Crook says Newcastle’s third bid would be in excess of the club-record £40million they paid for Joelinton in 2019.

The need for recruitments was highlighted by Newcastle’s humbling at the hands of Cambridge United in the FA Cup at the weekend, especially in attack with Callum Wilson set for a spell on the sidelines.

And Crook added Howe is an admirer of Burnley forward Chris Wood, however, that deal is unlikely due to the Clarets being relegation rivals.

Howe is also said to be a ‘big fan’ of Norwich man Todd Cantwell, while Newcastle are keen on Patrik Schick, who scored one of the standout goals of Euro 2020, but a move for the Bayer Leverkusen star appears unlikely at this stage.

Newcastle may also struggle to land Ramsey in January

There’s also been a setback in Newcastle’s bid for Aaron Ramsey, who appeared set to leave Juventus.

However, Crook says this may not happen this window as Ramsey is owed ‘quite a bit of money’ by the club.

The situation has been made more difficult by Juve boss Massimiliano Allegri banishing the Wales international from training and senior players such as Giorgio Chiellini are said to be imploring him to bring Ramsey back in from the cold.

There’s still plenty of time for Newcastle to get their deals over the line but former Crystal Palace owner Simon Jordan has warned their owners they’re set to have their ‘pants taken down’ no matter how astute they try to be in the window.

Jordan told talkSPORT: “I got into this debate with Martin Keown about not getting drawn into overpaying for everything. That’s what they’re going to get forced into doing because everyone knows they’ve got more money than God.

“Newcastle have got a decision to make… if you want to buy your way out of this problem, and if that problem resolves by paying £40million for Botman then job done.

“I’m leaning more towards get on with it, get it done, pay the money.

“They’re going to get their pants taken down whichever way they want it. People know they’re in a room with a bag of money.”