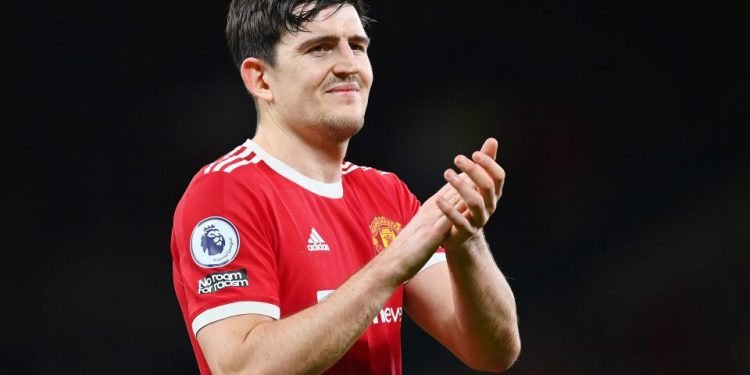 Manchester United might’ve cruised to a 3-1 victory over Burnley – but it was yet another miserable night for Harry Maguire.

Despite his team’s dominance, the Red Devils skipper still looked a considerable distance off the pace.

The 28-year-old had a difficult night against the ClaretsGetty

It’s the 12th time in 16 games that United have failed to keep a Premier League clean sheet with the England international in defence this season – and talkSPORT host Jason Cundy was staggered by his performance against Burnley.

The former Chelsea striker said: “He looked like he was staggering home from the pub at about quarter-past-twelve on New Year’s Day!

“He was all over the place.”

As one of United’s most expensive ever signings, the £80million man’s abject season is all the more frustrating.

However, Cundy insists Ole Gunnar Solskjaer – who was sacked by the Red Devils in November – is responsible for Maguire’s alarming dip in form.

Cundy added: “I think he’s been let down by Solskjaer, in all honesty. I don’t think that’s helped him at all.

“I don’t know how Ralf Rangnick is going to turn him into a better player, but we will see.

“I don’t think he [Solskjaer] coached them tactically. If Antonio Conte had Harry Maguire, he would be in the middle of a back three, you would see a performance from him.

“You would see the player I saw at Hull and Leicester.”

The explainer: Could the EU really expel Hungary?