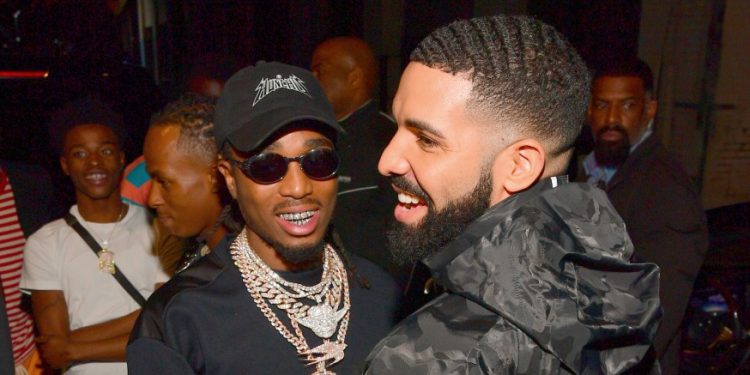 Drake’s got a plethora of hobbies — collecting women’s bags, shooting hoops with NBA players, and even hitting the links with his uncle — but the one that’s undoubtedly cost him the most over the years is his penchant for sports gambling. In 2019, Future revealed that the two spent their whole joint tour gambling. Drake’s had his share of ups and downs but after Monday’s College Football National Championship, he owes Quavo big.

Quavo, who backed his home state Georgia Bulldogs, called out Drake, who bet on the Alabama Crimson Tide, on Instagram, joking that his Canadian compadre was ducking his calls after Georgia beat Alabama, 33-18. “He ain’t answer the phone,” said Quavo. “I need my chips with dip, baby. I need my chips with dip.” The two rappers had engaged in some cheerful trash talk before the game after Quavo posted a photo of them, warning Drake, “U kno why I’m here @champagnepapi we are locked in we are down.” Drake replied, “Run me my bread right after nice and slow no sudden movements.”

It looks like Drake is regretting that bet, but in actuality, you could say he’s really just paying Quavo back after Alabama beat Georgia in the National Basketball Championship a couple of years ago. He’s probably already hoping to get it back in this year’s tournament, so good luck to both Alabama and Georgia, because this is one rivalry that’s entertaining even without the drama on the field.