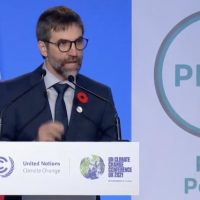 With a decision by Environment and Climate Minister Steven Guilbeault expected next week, nearly 200 environmental and citizens’ groups from Canada and beyond are urging the federal government to reject the mammoth Bay du Nord oil and gas development off the coast of Newfoundland.

The project is expected to extract about a billion barrels of oil, CBC reports, while creating thousands of jobs and delivering about C$3.5 billion in royalties to a cash-strapped province that is dependent on oil and gas revenues.

Guilbeault and his cabinet colleagues will be making their decision in the shadow of a devastating report on climate change impacts, adaptation, and vulnerability, issued earlier this week by the Intergovernmental Panel on Climate Change, that documents the “atlas of human suffering” in store—particularly if greenhouse gas emissions are not drastically reduced.

Guilbeault is expected to reach his own decision on the project next week, the Chronicle Herald writes.

A group of civil society groups led by the Sierra Club of Canada Foundation connected the project decision to the IPCC report in a March 2 release, likening a billion barrels of oil extraction to the emissions from seven to 10 million internal combustion cars per year.

“This project would further lock the Newfoundland and Labrador economy into dependence on fossil fuels, at a time when a green transition is needed instead,” said climate impacts researcher Conor Curtis, Sierra Club’s digital communications coordinator.

“The federal cabinet should honour calls from within the province for a just, green transition and act now to support workers and communities,” he added. “We need to say no to Bay du Nord. We need to protect other industries like fisheries from the immediate environmental risks, and long-term climate impacts, the oil from this project poses.”

On Wednesday, the Canadian Association of Petroleum Producers touted Bay du Nord as a way to ensure energy security for Canada and its trading partners, adding that Russia’s share of the global oil market would grow significantly if other countries stopped spending on new fossil projects, CBC says. And Newfoundland and Labrador Premier Andrew Furey pitched his province’s fossil fuels as an alternative to Russian supplies, stopping “just short of calling it an opportunity,” the national broadcaster writes.

“We have right here what the world needs as well, and that is to relieve some of our NATO partners of the tyranny of Russia and their stranglehold on the energy around the world,” he said.

That thinking runs counter to the wave of analysis pointing to Russia’s invasion of Ukraine as evidence for a faster phaseout of fossil fuels, including gas, in favour of renewable energy and energy efficiency.

“In the wake of the Russian invasion of Ukraine there has been a shameful attempt by fossil fuel proponents to justify further oil and gas exploration and development as a global security measure, even though Ukraine’s delegate to the IPCC has publicly criticized the world’s continuing dependence on fossil fuels as a cause of continuing aggression,” the Sierra Club release states.

“Approving Bay du Nord would take Newfoundland and Labrador in the wrong direction—both in terms of the climate crisis and long-term economic security,” said University of Waterloo associate professor Angela Carter, a member of the province’s Net-Zero Advisory Council, whose past work has critiqued Ottawa’s “one eye shut” policies on climate and energy transition.

“Instead of expanding oil production, our priority challenge right now is managing a wind down of oil production that allows workers and communities to seize the benefits of the low-carbon energy transition,” Carter said in the release.

Belarus president: No need for a Russian base in our country