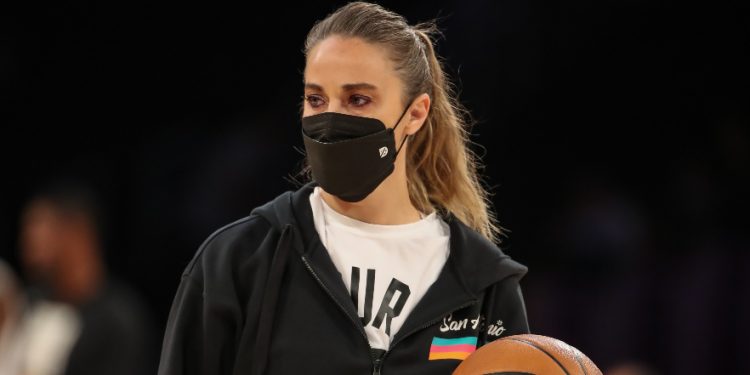 Becky Hammon, the WNBA legend and longtime assistant with the San Antonio Spurs, is reportedly on the verge of becoming a head coach for the first time in her career. According to a report by Shams Charania and Chantel Jennings of The Athletic, Hammon is going to return to the WNBA and take over the Las Vegas Aces.

The report was confirmed by ESPN, with both reports indicating that the Aces will give Hammon a record-setting contract over five years. During her playing days, Hammon established herself as one of the best players in franchise history from 2007-14, although that was when the Aces were based out of San Antonio. Her number was retired by the franchise in 2016, and remains the only number it has ever retired.

Following her retirement, Hammon joined the Spurs’ coaching staff, becoming the first woman to serve as a full-time assistant coach in NBA history and the second, behind Lisa Boyer’s stint as a volunteer assistant with the Cleveland Cavaliers in 2001, to serve as an assistant coach in any capacity. She became the first woman to coach in the NBA Summer League in 2015, and in 2020, Hammon again made history when she served as the Spurs’ head coach following a Gregg Popovich ejection.

Hammon’s name has popped up in a number of NBA head coaching searches in recent years, and earlier this year, she was reportedly a finalist for the Portland Trail Blazers’ job, which ultimately went to Chauncey Billups. In August, Hammon told Dime’s Katie Heindl what she was looking for in a head coaching job as her name continued to be mentioned for various vacant positions.

“Support from the organization, support from the community,” Hammon said. “You’ve got to build a culture where people enable other people to be great. And you help that by everybody jumping in and helping wherever you can help. I’m somebody who’s leadership style is very relationship oriented in the sense that, I want to know the guy’s stories. I want to spend time with them. I want to get to know them as people, because I want to coach the whole person.”

ESPN reports that Hammon will remain with the Spurs until this NBA season ends, while The Athletic brings word that her hiring means that the Aces’ current coach, Bill Laimbeer, will step aside. After the news of Hammon’s hiring hit Twitter, several Las Vegas players took to social media to celebrate the news.

I put down my phone to play cards for 10 minutes

Tell the truth. I called and she said I’m playing cards.. can I call you tomm?? I said no you can’t.

Hammon will take over one of the best teams in the league. Last season, the Aces finished second in the WNBA with a 24-8 record in the regular season, with Wilson earning a All-WNBA Second-Team nod and Plum winning the Sixth Woman of the Year award. The team earned a double bye in the WNBA playoffs, but fell to the Phoenix Mercury in five games. It came on the heels of a 2020 campaign in which the team made the WNBA Finals for the second time in franchise history — their first Finals appearance, in 2008, came with Hammon serving as its starting point guard.

Overcoming homophobia in Poland, one Polonez at a time