Russia claims it will begin talks with US and Nato 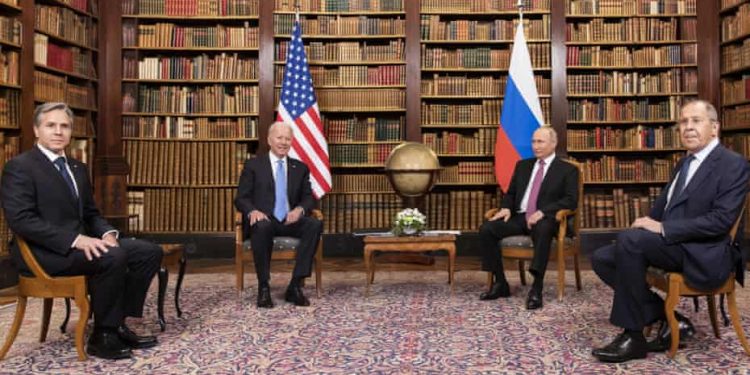 Russia claims it has has agreed to begin talks with the US early next year to discuss Moscow’s demands for “security guarantees” in Europe, including a ban on Ukraine’s entrance into the Nato military alliance.

If confirmed, the talks would begin a contentious effort to avert a Russian offensive in Ukraine this winter, as Kyiv and eastern European governments have demanded not to be left out of any deal with Moscow that affects their interests as well.

Moscow has moved tanks and artillery towards the border with Ukraine in an apparent invasion threat and issued a contentious list of security guarantees in a draft treaty with Nato that its leadership has called unacceptable.

The Russian foreign minister, Sergei Lavrov, announced the talks during an interview with the RT television station on Wednesday, where he said negotiations would start “at the very beginning of next year”.

“The first round will be held in the form of a bilateral contact between our and US negotiators, who have already been named and are acceptable for both sides,” Lavrov told the broadcaster, which is backed by the Russian state.

The exact agenda and scope of the talks has not been made public and the Kremlin may be keen to exaggerate its diplomatic efforts as it positions itself for a potential attack against Ukraine.

US officials have not spoken publicly about the talks yet.

“We do not want war,” Lavrov said during an interview. “We do not need conflicts and, hopefully, everyone else does not view conflicts as a desirable course of action.”

He also said similar talks would be held with Nato and with the Organization for Security and Co-operation in Europe. Details of those talks were also not given.

A Kremlin spokesperson also welcomed the talks, telling reporters: “The very fact that such preparedness [for talks] has been reaffirmed is good as it is.” He warned that Russia was wary of the discussions being dragged out and was not interested in participating in “a marathon”.

Vladimir Putin had appeared frustrated on Tuesday as he railed against Nato expansion since the fall of the Soviet Union, telling his top military commanders that growing western influence in Ukraine left Russia “nowhere further to retreat to” and that he would not stand by and “watch idly”.

Last week, Russia released a draft of a potential treaty with Nato that demanded the military alliance remove all troops and infrastructure installed from European countries that joined the alliance after 1997. That includes countries that were part of the Soviet Union or the Warsaw pact, whose officials say the Russian proposals undermine their sovereignty and security.

Nato officials said Jens Stoltenberg, the organisation’s secretary general, had signalled on Tuesday that the military alliance would call for a meeting of the Nato-Russia council early next year, and that any talks with Moscow would have to involve all European members of the alliance and Ukraine.

Nato pointed to remarks made by Stoltenberg in a press conference with Romania’s prime minister on Tuesday in which he had said: “Any dialogue with Russia needs to be based on the core principles of European security and to address Nato’s concerns about Russia’s actions. And it needs to take place in consultation with Nato’s European partners, including with Ukraine.”

A Nato official said talks would have to be conducted on the basis of reciprocity and must address Nato concerns about the Russian military build-up and other actions, in line with a joint statement from the alliance’s North Atlantic Council agreed last week.

Man United v Wolves live stream and team news: Cristiano Ronaldo made first ever Premier League start against the Wanderers in 2003 – kick-off time, TV Channel and how to follow