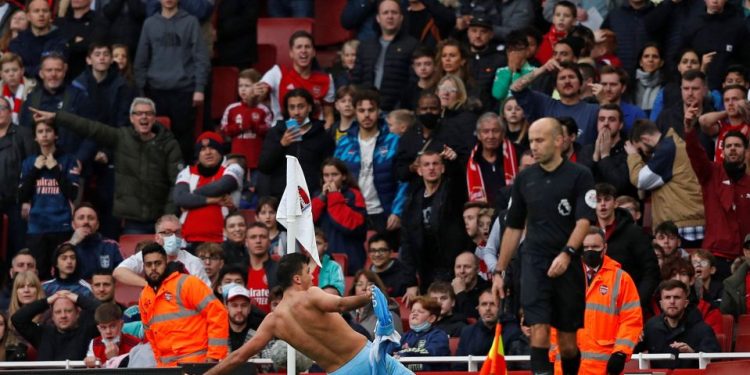 Rodri’s celebration of his late winner for Manchester City at Arsenal on Saturday sparked a debate between Simon Jordan and Danny Murphy on talkSPORT.

The City midfielder snatched all three points in the dying moments, completing a dramatic turnaround after the Gunners had taken a deserved lead.

Rodri rubbed it in the faces of the onlooking Arsenal fansAFP

Emotions were running high following a fiercely competitive match, which saw a controversial penalty awarded to the visitors and a red card for the hosts, who were denied a spot-kick of their own.

With City’s travelling support going wild in the opposite corner, Rodri instead sprinted over to the home fans, ripping off his shirt and sliding on his knees, before punching the air and cheering in front of some infuriated Arsenal fans.

Numerous objects were launched onto the pitch as the City players celebrated with Rodri – and former Crystal Palace owner Jordan insists the Spaniard’s actions were ‘stupid and unnecessary’.

But former Liverpool midfielder Murphy hit back, insisting ‘shutting up the fans’ has always been part of the game.

And things got a bit heated… read the full debate below!

SJ: “The player has got to learn to control himself.”

DM: “Why? He didn’t go into the crowd. He took his shirt off. Is that offensive?”

SJ: “It’s not offensive. It’s stupid because you get booked for it. The bottom line is he should have some discipline and he should dial it back.”

DM: “I’d be going over to my fans. But I can say this from playing the game and I can give you a few examples. When you score a goal, sometimes, something comes over you that takes away logic.”

SJ: “But did you see what Rodri did? Do you believe he went to bait Arsenal fans?”

SJ: “If he did then he needs to be a bit mindful of the situation because, ultimately, if something happened to him, he would be the first person to say, ‘This is outrageous!’

SJ: “No, if you’re going to check your step and dive one way to go to the other fans and give it to them, you don’t need to do that. Celebrate your moment with those that count, not those that don’t. The Arsenal fans don’t count. You’ve won the game, you’ve done them up like a kipper, go celebrate with your fans.”

DM: “I can only say, you can only understand it when you’ve done it and you haven’t.”

SJ: “He’s chosen to take that emotion and turn it into confrontation, and that’s a choice. [He thought] ‘I’m a smart-arse, you can have some back’. But you gave it back to them by scoring. If something happened to him, whose fault would it be?”

DM: “The person who threw something.”

SJ: “No! It’s a combination of the two. Come on now. It’s silly what he’s done. It doesn’t give anybody the license to behave badly in response, but it’s cause and effect, you cause the effect by going over to those fans. I’m not justifying the effect.”

Murphy insists passion and emotion takes over in those momentsAFP

DM: “You can’t have it both ways! If you want passion…”

SJ: “Celebrate with your own fans. If they want to give him pelters, when he runs over to them, he invites something he doesn’t need.”

DM: “I disagree. You’re doing your job. You’re scoring a winning goal for your team.”

SJ: “And giving it to the fans? Running to those fans?”

DM: “That’s what football is and always has been. It’s shutting up the away fans, it’s shutting up the home fans. Celebrating a goal and staying on the pitch is not crossing a line! If you want to use that to say he’s provoking someone to throw a bottle, then fine.”

Arsenal were already feeling aggrieved before the late winnerAFP

DM: “Then what are you saying? You’re one or the other!”

Jim White: “What are you saying, Danny? Are you saying what Rodri did was absolutely acceptable? Shirt off running right towards the away fans, saying ‘have that’?”

DM: “Yes, yes, yes! Damn right. Absolutely. And if one of Arsenal’s players did the same I’d say the same thing.”

SJ: “It doesn’t justify any of the behaviour from the fans in response. But it’s stupid and unnecessary. Do it with your own fans. If you’re so happy to celebrate something, then why has your euphoria turned into antagonism?”

DM: “It’s called emotion and passion Simon, something you know nothing about!”

The Warsaw Stock Exchange 30 years on