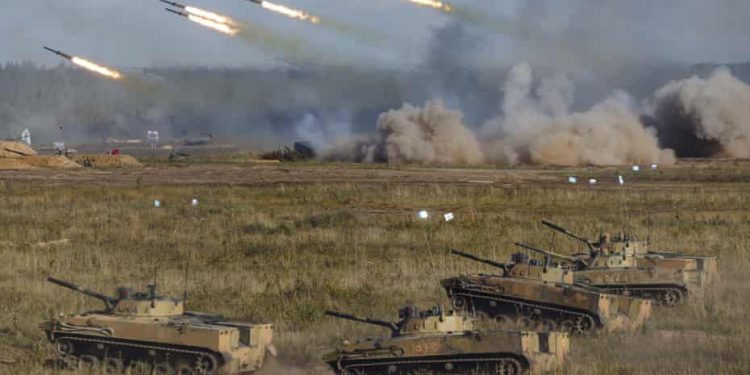 Russia has begun moving troops to Ukraine’s northern neighbour Belarus for joint military exercises, in a move likely to increase fears in the west that Moscow is preparing for an invasion.

The joint military exercises, named United Resolve, are to take place as Russia also musters forces along Ukraine’s eastern border, threatening a potential invasion that could unleash the largest conflict in Europe for decades.

Social media videos from Belarus appeared to show artillery and other military vehicles arriving on flatbed carriages owned by the Russian state railway company, and Alexander Volfovich, the head of Belarus’s security council, said in a briefing that troops were already arriving before exercises scheduled for February.

Some military analysts have suggested Russia could send its forces through Belarus in the case of a broad invasion, effectively stretching out Ukraine’s defences by taking advantage of the two countries’ nearly 700-mile border. Others believe Belarus would not play a serious role in the conflict if Russia were to launch an attack on Ukraine.

The Belarusian leader, , has responded to international pressure and isolation by strengthening ties with Russia, giving vocal support for Putin’s military buildup as he receives diplomatic and economic support from the Kremlin to battle western sanctions. He has also abandoned his country’s supposedly neutral stance on the Ukraine conflict and publicly endorsed Russia’s 2014 annexation of Crimea.

The exercises are to be held in the west of Belarus, near the borders of Nato members Poland and Lithuania, and its southern flank with Ukraine, Lukashenko said.

“Set an exact date and let us know, so we aren’t blamed for massing some troops here out of the blue as if we are preparing to go to war,” he told top military officials.

Reports from Russia have also shown more military equipment, including tanks and short-range ballistic missiles, being transported across the country toward Ukraine within the last week.

The German foreign minister, Annalena Baerbock, said before a meeting with her Russian counterpart on Tuesday that she hoped the tensions could be resolved by diplomacy but if not Moscow would pay a “high price” for aggressive acts toward Ukraine.

No concrete troop numbers or timeframe have been named for the joint Russia-Belarus exercises, which Putin announced during a summit with Lukashenko in late December. Lukashenko said on Monday that the exact dates in February were still being determined.

He said during the briefing that the exercises were needed because of the presence of Nato forces in neighbouring Poland and the Baltic states, as well as Ukraine’s deployment of troops to the border in response to the migrant crisis that he helped create last year.

“Why are we and Russia being reproached for holding manoeuvres, exercises and so forth when you’ve come from far away?” said Lukashenko in heated remarks in which he said western countries had stationed nearly 30,000 troops near his country’s borders. “There are some hot-heads calling for war. We hear these statements.”

He also echoed aggressive Kremlin rhetoric that may be used to justify a military intervention in Ukraine, claiming that Kyiv was preparing battalions of “radical nationalists”. A Ukrainian official called the remarks manipulative and “part of an information war”.

Volfovich said the exercises would involve Belarusian and Russian soldiers training to repel air and land attacks, neutralise enemy saboteurs and practise other manoeuvres. He also played down the significance of their timing, saying that there was “nothing extraordinary” in them because they were announced late last year, according to a report in the state-run Belta news agency.

There are signs, however, that Belarus has taken a more active role in its support of Russia in its ongoing conflict with Ukraine and the west.

Kyiv initially said it believed a hacking team tied to Belarusian state intelligence may have played a role in a major cyber-attack on government websites late last week, and Russian nuclear-capable bombers have recently flown over western Belarus.

Lukashenko has strengthened ties with Putin since 2020, when he launched a bloody crackdown on protests sparked by vote-rigging during presidential elections. He was driven further into international isolation after he grounded a RyanAir flight in order to arrest a critic of his government and helped manufacture a migrant crisis on EU borders, prompting a humanitarian emergency.

Belarus adopted an ostensibly neutral position in 2014 and avoided recognising Russia’s annexation of Crimea, but the dynamic has changed considerably as the country has relied more on Russian diplomatic and material support in the last two years.

Werewolf: The Apocalypse – Heart of the Forest. Not for the first time, emerging Europe delivers a winner