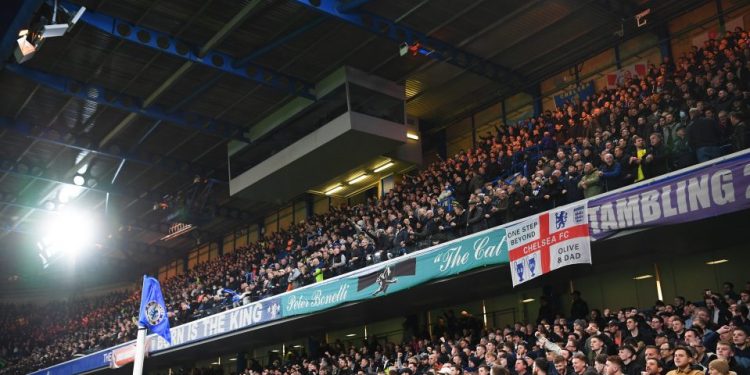 Chelsea supporters hailed a milestone day as the club became the first Premier League side to host a safe-standing pilot in Sunday’s 2-2 draw against Liverpool at Stamford Bridge.

Blues fans were the first to experience the new safe-standing match-going experience being trialled across the English top flight and Championship.

It was an historic day for English footballGetty

Sunday’s match marked the end of a blanket ban on standing in the top two tiers of English football which has been in place for more than 25 years, with those clubs having been required to provide all-seated accommodation since August 1994 in the wake of the 1989 Hillsborough disaster.

Manchester United, Manchester City, Tottenham and Cardiff are the other clubs in the pilot, which represents the realisation of a Conservative manifesto pledge for the 2019 General Election.

The Chelsea Supporters’ Trust has long lobbied for a safe-standing mechanism, and was delighted with the first match under the pilot programme.

Vice-chair Dom Rosso, who was among those to experience the new rail seating first hand, said: “The Chelsea Supporters’ Trust has campaigned for Safe Standing at Stamford Bridge for years and we are pleased that Chelsea is leading the way with this trial.

“It was fantastic to see so many supporters standing safely at the game – it contributed to an excellent atmosphere and the railed seating kept supporters safe and protected.”

Chelsea have installed rail seating areas in the lower tier of the Matthew Harding Stand as well as in the upper and lower tiers of the Shed End.

It was a whole new experience for some fansGetty

Chelsea were spurred on by a raucous home crowd during their quickfire comeback, as the Stamford Bridge faithful helped inspire a truly crazy match.

Blues boss Thomas Tuchel was seen firing up the supporters on numerous occasions – and the pilot certainly appeared to be a success.

Arsenal legend Ray Parlour insisted it was one of the most entertaining football matches he’s ever watched.

He told talkSPORT: “The quality of the game yesterday was fantastic.

The players felt the full force of the Stamford Bridge crowdGetty

“I was sitting in my front room, as a neutral, that was one of the best first-halves I’ve ever seen.

“It looked like Liverpool would win when they went 2-0 up, but credit to Chelsea, they showed great character.”