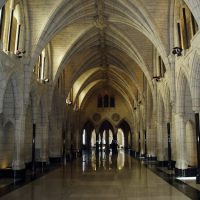 The Canadian Net-Zero Emissions Accountability Act (Bill C-12) had passed the House of Commons less than a week before, setting the stage for senators to decide the fate of the legislation—and the years-long research, policy, and advocacy effort that brought it into being.

“The adoption of Bill C-12 by both Houses of Parliament is a groundbreaking moment and ushers Canada into a new era of accountability to its climate commitments,” said Climate Action Network-Canada (CAN-Rac) Executive Director Catherine Abreu. “After decades of broken climate promises made on the international stage, years of relentless mobilization by the climate community led to this legislative milestone. While the Bill is by no means perfect and we will work to ensure its robust implementation, this moment is a testament to people power, and a big step forward for Canadian climate action.”

“Canada finally has a climate accountability framework—now we need to implement it,” wrote Ecojustice lawyer Alan Andrews, whose organization played a pivotal role in developing the legal arguments and strategies behind the bill.

“Despite knowing for decades that climate change is a rapidly growing threat to our health, environment, communities, and economy, Canada has missed every single greenhouse gas target it has ever set,” he added. “In the absence of a climate accountability law, successive governments have faced few consequences for this ongoing failure.”

Which is why “establishing a framework to support Canada in finally meeting its pollution targets is a practical and necessary step to change this trajectory.”

Environment Minister Jonathan Wilkinson introduced what critics saw as an “underwhelming” C-12 in the House in November, 2020. Months later, it was still languishing on the Order Paper, with few visible signs that the government planned to move it to committee for detailed study. The bill went through a requisite effort by the Conservative opposition to quash it entirely, before the Liberals and New Democrats agreed on a package of revisions and climate hawks pushed hard for further improvements.

By the time the Commons held its final vote on C-12 last week, a Senate committee was already conducting a pre-study of the bill, Senate sponsor Sen. Rosa Galvez (ISG-Quebec) was optimistic it would pass the Red Chamber, and even fossil senator Doug Black (CSG-Alberta) seemed kindly disposed to the measure.

“Kudos to the Senate and @SenRosaGalvez for getting this climate accountability bill through at the end of session,” Sussex Strategy senior counsel Shawn McCarthy tweeted late yesterday afternoon. “The bill doesn’t ensure success of Canada’s net-zero ambition but is an important tool for accountability.”

In a release, Galvez said yesterday’s vote marked a break from the Senate’s “shameful record of killing climate and environmental legislation.”

With 15 other countries already operating under comprehensive climate accountability frameworks, she added, Canada is “late to the race, and given our history of failures to meet unambitious targets, we need this methodically planned framework to hold this and all consecutive governments accountable for demonstrating how they will achieve net-zero emissions by 2050. Governments will no longer be able to set climate targets without being accountable to Canadians on their plan to achieve our objectives.”

CAN-Rac, which played a central part in the legislative fight for the bill, says the final version:

• Establishes a long-term target of reaching net-zero emissions in 2050;

• Contains a legislative requirement for emissions reductions targets at five-year milestones beginning in 2030, with an interim objective in 2026;

• Legislates a Net-Zero Advisory Body composed of diverse stakeholders and rights-holders to advise the minister of environment and climate change on targets and plans;

• Requires the minister to consider the United Nations Declaration on the Rights of Indigenous Peoples in climate planning and target-setting;

• Mandates a legislative review of the bill, five years after its adoption.

“Bill C-12 is not perfect,” said Ecojustice’s Andrews. “But it does bring Canada closer to taking the action needed to stave off a climate catastrophe. Crucially, we finally have a legislative framework that will require the federal government to have a plan to meet pollution targets (and take more action if they are off track). Over time, this law can be improved if experience shows it isn’t up to the task.”

“Canada has missed every climate target it has set for itself because climate change has never been seen as a true emergency, like COVID-19,” said West Coast Environmental Law staff lawyer Andrew Gage. “The Canadian Net Zero Emissions Accountability Act will play a crucial role in Canadian climate action—and in implementing it, the government must do the tough work to figure out how to rapidly reduce greenhouse gas emissions, and then follow up with the same type of action and regular reporting we’ve seen during the COVID-19 pandemic.”

“We are in a health emergency: the heat dome currently sitting over Western Canada has broken the Canadian high-temperature record for two days in a row,” said Yellowknife, NWT emergency physician Courtney Howard, past president of the Canadian Association of Physicians for the Environment. “In emergency resuscitation in the ER, we use frameworks and protocols to clarify roles, set expectations, and embed data checks so our team can work in a well-coordinated and time-efficient way to save lives. We look forward to seeing even more rigour added at the five-year legislative review. As in cardiopulmonary resuscitation, we must push hard, push fast, and not stop.”

“As extreme heat overwhelms communities across the country, let us acknowledge that change is inevitable, but whether it will be orderly or catastrophic is very much under governmental control,” said Sabaa Khan, the David Suzuki Foundation’s director general for Quebec and Atlantic Canada. “Adoption of Bill C-12 would be a first, long-awaited step towards building the robust legal framework necessary to ensure that Canada’s deeply entrenched fossil fuel past does not annihilate our future.”

“Tens of thousands of people across the country demanded that our political leaders strengthen Bill C-12, and we now have a first-of-its-kind climate accountability law,” said Leadnow campaign manager Claire Gallagher. “Although the bill is not perfect, today we’re celebrating people power and a necessary step towards the kind of climate action that is long overdue in Canada.”