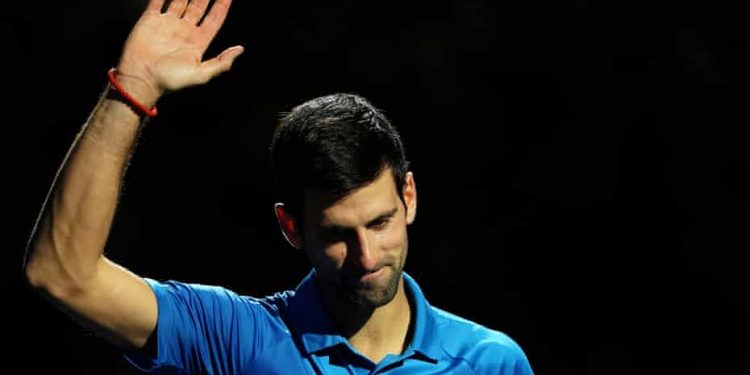 The Serbian president has accused Australia of “maltreatment” of tennis star Novak Djokovic, who was denied entry to the country after he flew into Melbourne with a medical exemption from coronavirus vaccination rules.

Djokovic was granted a controversial exemption to enter Australia and compete in the Australian Open, but was held up at Melbourne airport by authorities for several hours before his visa was cancelled. The Australian Border Force said he had failed to provide adequate evidence to support his exemption.

Serbian president Aleksandar Vučić said the country had offered support to the world No 1. “I told our Novak that the whole of Serbia is with him and that our bodies are doing everything to see that the harassment of the world’s best tennis player is brought to an end immediately,” he said in a statement.

Australian prime minister Scott Morrison rejected the harassment suggestion on Thursday, saying: “Australia has sovereign borders and clear rules that are non-discriminatory as so many countries do … it has to do with the fair and reasonable application of Australia’s border protection laws … all I can say is that the evidence medical exemption that was provided was found to be insufficient.”

In December Tennis Australia released its Covid vaccination policy for Melbourne’s grand slam which included a process for players seeking medical exemptions to enter Victoria without having to undergo a 14-day quarantine. Djokovic, who is opposed to vaccination, said he had been granted an exemption to compete in the competition although the exact nature of it is unclear. The head of Tennis Australia, Craig Tiley, said exemption applications were de-identified and rigorously assessed, and that only a handful of other players and officials had been granted exemptions out of 26 applications.

The initial approval sparked public outrage before the tennis star had landed, and the cancellation of his visa only added to the furore.

Djokovic’s father, Srdjan, told Russian media he was outraged by the treatment of his son. “Tonight they can throw him in a dungeon, tomorrow they can put him in chains. The truth is he is like water and water paves its own path. Novak is the Spartacus of the new world which won’t tolerate injustice, colonialism and hypocrisy.”

US player Tennys Sandgren, an Australian Open quarter-finalist in 2018 and 2020, said Australia didn’t deserve to host a grand slam. “Just to be crystal clear here, two separate medical boards approved his exemption. And politicians are stopping it,” said Sandgren, who has also opted not to get vaccinated or play in the tournament.

Renae Stubbs, a former Doubles world No 1 and ESPN host, described the situation as “officially a massive shitshow”.

“I think ScoMo [Australian prime minister Scott Morrison] made this a moment because the Australian public is so annoyed by Djoker,” she said on Instagram. “I would be ropeable if I was [Djokovic]. Also the other lesson is, get vaccinated.”

Morrison on Thursday confirmed Djokovic’s visa was cancelled, saying “rules are rules” and praising federal Covid policies, a day after saying such exemptions were a matter for state governments. “Our strong border policies have been critical to Australia having one of the lowest death rates in the world from Covid, we are continuing to be vigilant,” he said.

Australian tennis legend Rod Laver earlier told the Herald Sun newspaper that Djokovic should reveal the medical exemption he was granted. “Yes, you’re a great player and you’ve performed and won so many tournaments, so, it can’t be physical. So what is the problem?”

World No 1 Ashleigh Barty said it had been difficult for Australians, and Victorians in particular, during the pandemic but that she had “no interest in speaking about Novak’s medical history”. She added: “I understand why they may be frustrated with the decision [to grant Djokovic an exemption].”

The coach of 17-year-old Indian tennis player Aman Dahiya, who was denied an exemption to play the Australian Open junior championships, also accused Australian and tennis authorities of double standards over Djokovic’s early approval. Dahiya was denied entry because he was unvaccinated, because India has not yet allowed people under the age of 18 to receive a vaccine.

His coach, Jignesh Rawal, said they had offered for Dahiya to find a dose and quarantine but were refused, and he said Dahiya was allowed to become “collateral damage” of Australia’s policies but Djokovic – initially – was not.

“It shouldn’t be different,” he said. “The circumstances don’t matter. The rule is if you don’t have two vaccine doses you cannot enter,” he said. “Djokovic can have special treatment on the court (like centre court priority) but the entry point has to be the same.”

Morrison, who is under fire over his refusal to make rapid tests free or affordable to address major shortages and huge PCR wait times as the country struggles with its worst ever outbreak, had strong words for Djokovic on Wednesday.

At a press conference he said Djokovic would be “on the next plane home” if he was unable to provide proof of his medical exemption.

On Thursday morning Djokovic was reportedly taken to a quarantine hotel ahead of expected deportation.