Serbia’s leaders hit out at ‘scandalous’ treatment of Novak Djokovic 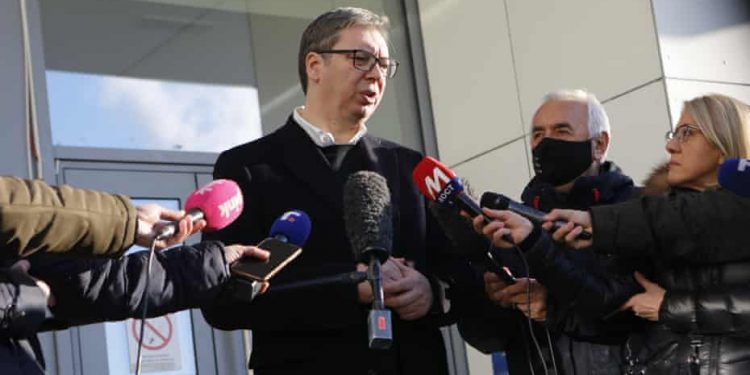 Serbia’s president has said Novak Djokovic had been “harassed … but not humiliated” and the prime minister called his treatment “scandalous” as the world tennis No 1’s home country reacted furiously to his deportation from Australia.

After an 11-day saga, three judges unanimously upheld a decision by the immigration minister to cancel Djokovic’s visa because he was not vaccinated against Covid-19, removing any chance of him winning a 21st grand slam at the Australian Open.

“I think the court decision is scandalous … I find it unbelievable that we have two completely contradictory court decisions within the span of just a few days,” the Serbian prime minister, Ana Brnabić, told reporters in Belgrade.

“I am disappointed … I think it demonstrated how the rule of law is functioning – or better to say not functioning – in some other countries. In any case, I can hardly wait to see Novak Djokovic in our own country, in Serbia.”

Djokovic, who was photographed wearing a mask in a Melbourne airport lounge with two government officials in black uniforms, left on an Emirates flight to Dubai after releasing a statement saying he was disappointed but accepted the decision.

The Serbian president, Aleksandar Vučić, called the court ruling “a farce”. He said he had spoken to the player and had told him he should “return to his country, come home to Serbia, to where he will always be welcome”.

Vučić said Australian authorities may “think they humiliated Djokovic, the best player in the world, with this 10-day harassment, [but] they humiliated themselves. He can return to his country with his head held high and look everyone in the eye.”

If it was “up to principle, they should have said unvaccinated players cannot enter – but they did not say that,” Vučić said. “They gave him an exemption. Why did it take them so long, why did they treat him like that, why create this kind of theatre?”

He said he was sure Djokovic “would have been treated differently if he hadn’t come from Serbia … If he was from another country, the approach would be completely different. Of course people here are frustrated, 90% are on Novak’s side.”

The player’s father, Srđan, said the episode amounted to “an attempted assassination with 50 bullets to the chest”, while the sports minister, Vanja Udovičić, described it as “nonsense and shame, absurdity and hypocrisy”.

The Serbian tennis association said the “farce was over” and expressed its “huge disappointment”, describing the decision to deport Djokovic, who has won nine Australian Open titles, as political.

“Political pressure has led to the revocation of his visa to satisfy public interest,” it said. “It begs the question whether athletes will from now on be incarcerated like criminals and deported when it suits the political interests of powerful individuals.”

Boško Obradović, the leader of the far-right opposition party Dveri (the Doors), said Belgrade should introduce countermeasures and “chase the Australian ambassador” out of the country.

On the streets of the player’s home town, Belgrade, many people agreed. Milan Nikolić said the dispute “could have been sorted out differently. It is not like the Australian government did not know who Djokovic is, what the procedures are.”

Marko Djurickovic, who said people should be able to decide for themselves whether to get vaccinated, thought the decision was “clearly political”. The world No 1’s choice not to get vaccinated would not influence vaccine take-up in Serbia, he added.

“He is a public figure but he is not the government,” he said. “I blame them. They did not explain properly the necessity of a jab and frankly, no one trusts them; when they tell you to do something, it is part of civil disobedience to do the opposite.”

Divna Vukadin said the Australian move was clearly politically motivated. “Why did they call him, then revoke the visa? He produced all the right papers. So why now? This is really unfair. I would expect more from a country claiming to respect the rule of law.”

Both Vučić and Brnabić said Serbia had administered two doses to 58% of its population, not less than 50% as Australian authorities said. Data shows Serbia has double-jabbed 47% of its whole population, well below the EU27 average of 70.25%, although the percentage of the adult population is higher.

Milivoje Pantovic is a producer with N1 Television in Belgrade