Simon Jordan told to apologise to Jack Grealish for ‘moron’ outburst, but refuses to back down and adds that Man City teammate Phil Foden is a ‘twit’ over night out which saw both stars dropped 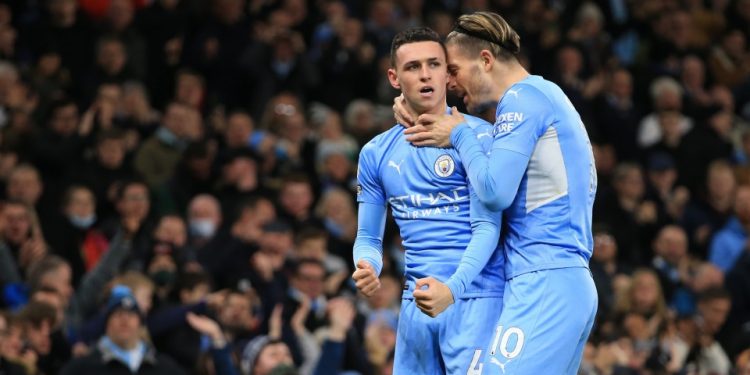 Gabriel Agbonlahor told fellow talkSPORT pundit Simon Jordan to issue an apology to Jack Grealish after calling him a ‘moron’, saying his criticism was too personal and out of order.

The young City duo were pictured on a night out after their 7-0 win against Leeds United, which subsequently saw them dropped by Pep Guardiola for their next match against Newcastle United.

The manager – who was in Spain for Sergio Aguero’s retirement speech at the time – then spoke publicly about the situation, saying he was unhappy having been told the pair were not in the best condition to train the following morning.

Many have weighed in with their thoughts on the situation and whilst the former Crystal Palace chairman was furious with Grealish and Foden, ex-Villa captain Agbonlahor believed he stepped over the line with some of his comments.

“I don’t know the whole facts of the situation, but I Googled ‘moron’ to find the exact meaning, a stupid person, and I think that’s harsh,” the former Villans striker told the talkSPORT Breakfast.

“But he just sounds to me like a bitter ex-club owner who it didn’t go well for at [Crystal] Palace in the end.

“He dislikes players. You can just picture negotiating a contract with him, he would be a nightmare.

“So, for me, I thought it was shocking from Simon. Players don’t mind being criticised by the media but when you start name-calling, I think it’s too much.

“It’s not acceptable from Simon, he should apologise to Jack. Even Jim White’s comments, he was defending Jack, he knows Jack is a good lad, so I just don’t understand how you can just go in on someone.”

Mr Jordan was back on air a few moments later but, in typical fashion, the outspoke pundit refused to back down from his comments.

And he even turn turned his attention to Grealish’s teammate and fellow party goer, Foden.

“I think it’s a fair observation based upon his behaviour,” Jordan said, defending his ‘moron’ jibe.

“I’m not saying Jack Grealish is a nasty, unpleasant individual, I’m not attacking his personality, I’m talking about his behaviour.

“You move into the territory of being moronic in your behaviour and a moron by definition.

“Now, I know people don’t like that and I know it’s strident, and Gabby is defending his friend, I understand that, but the bottom line is it’s a kind of irony about being offended on someone else’s behalf about someone calling somebody a name, whilst calling them a name in return.

“I think that might have evaded Gabby when he was talking about me being bitter and twisted and a failed owner. I can’t voice an opinion on someone else and then not accept the fact that people are voicing an opinion on me.

“And, there is a school of thought that Gabby shouldn’t have to Google the word ‘moron’ – all he needs to do is go in front of a mirror.

Agbonlahor won’t be pleased to see Jordan not backing downGETTY

“No, I don’t think so at all [when asked if he should issue Grealish an apology], I think if you can praise people you can criticise them.

“I’ve been a major advocate of Jack Grealish’s talents, I’ve talked about him in glowing terms and with the ying comes the yang.

“You can’t have a litany of behaviour starting from being laying all over benches in summer holidays getting yourself drunk so you’ve got a reputation that people don’t trust you.

“You build up the reputation again through your football, you then find yourself on the side of the road in a pair of slippers.

On the pitch, Grealish hasn’t had the best of seasons and is still adjusting to his new life at CityGetty

“Foden is a twit as well isn’t he? I mean a year ago he’s being pulled out of the England set up for behaving poorly.

“A year later he’s being a nitwit again, you can’t think of any other way of saying it.

“We praise these boys, we build them up, they’ve got to have the flip side of it otherwise you don’t build character.”

France makes a U-turn in Poland

Tell us: how has cognitive behavioural therapy changed your life?