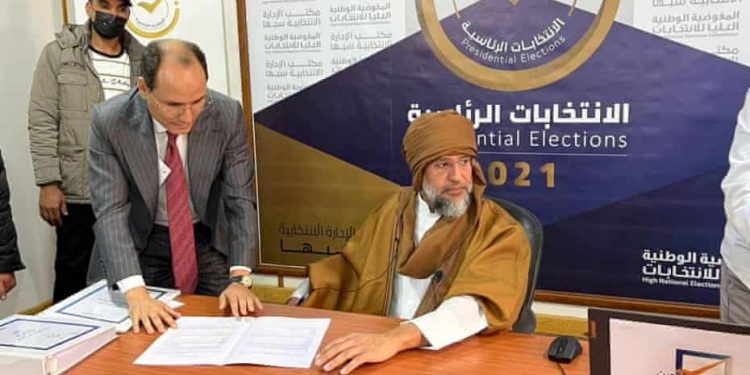 Saif al-Islam Gaddafi, one of the sons of the former Libyan dictator Muammar Gaddafi, has confirmed that he is to run for the presidency of Libya in elections due to start on 24 December.

He registered his nomination in the southern city of Sebha, the High National Electoral Commission has confirmed.

Video showed him signing his papers, spectacled with a white beard, and with traditional brown robe reminiscent of his father’s clothes. It remains to be seen how much popular support he has in the country, or whether the interest in his candidacy is largely based in western media.

His aides in London have for some time been suggesting that he will stand and insist that anyone who has read his remarks before his father’s death would know that he has different politics from those of his father, who ruled the country until his death at the time of the overthrow of his brutal regime in 2011.

The precise date and format of the presidential and parliamentary elections remains in dispute despite a meeting of world leaders in Paris on Thursday that called for the elections to go ahead on 24 December.

It is not known if he will be allowed to stand. The High National Electoral Commission has deleted information saying he was seeking the required 5,000 nominations.

His election would also be resisted by Turkey, which has a large number of troops in the country and is refusing to withdraw them despite European pressure. The Gulf states will back Saif, with some claiming that it would take Saudi pressure on France to see him win European backing.

More than 4 million people have been registered for the elections. It is likely the presidential election would lead to a runoff between the two top-placed candidates.

Saif al-Islam Gaddafi has spent the past decade out of public sight since his capture in 2011 by fighters from the mountain region of Zintan. At the time of the 2011 uprising he was captured at the desert outpost of Ubari before being taken to the mountain town of Zintan, where he was held by his captors while facing trial by video link in Tripoli in 2015 for his role during the uprising. He was sentenced to death, but was released six years later.

There would be renewed attempts to arrest him if he appeared publicly in the capital, Tripoli, mainly for his connections to the Russian mercenary operation the Wagner Group. He is also wanted by the international criminal court.

Educated at the London School of Economics and a fluent English speaker, Saif al-Islam was once seen by many governments as a western-friendly face of Libya, and appears to have been groomed for power by his father. Anas El Gomati, the founder of the thinktank Sadeq Institute, said: “He led initiatives to resolve the Lockerbie crisis in 2003, free Bulgarian nurses held by the regime in 2007, and spoke at academic events presenting himself as a reformer to the west. At the time of the uprising in 2011 he was expected to be conciliatory but sided with his father, threatening Libyans with chaos, and in subsequent speeches that ‘the killing would continue’.”

This summer he gave a brief and somewhat mysterious interview to the New York Times but has not yet made any public appearance speaking directly to Libyans.

Saif al-Islam Gaddafi attends a hearing behind bars in a courtroom in Zintan. Photograph: Reuters

He told the New York Times: “You need to come back slowly, slowly. Like a striptease.” He laughed. “You need to play with their minds a little.”

Other candidates for the presidency may include Gen Khalifa Haftar, the head of the so-called Libyan National Army and a leading figure in the east of the country. He has been accused of numerous war crimes, and mounted an abortive, year-long assault on Tripoli that would make him impossible for many in the west of the country to accept. The current interim prime minister, Abdul Hamid al-Dbeibeh, is also angling to run though there is a dispute about whether his current position bars him from doing so.

The former interior minister Fathi Bashagha is presenting himself as a compromise candidate with strong international support. The speaker of the parliament, Aguila Saleh, is also planning to run.