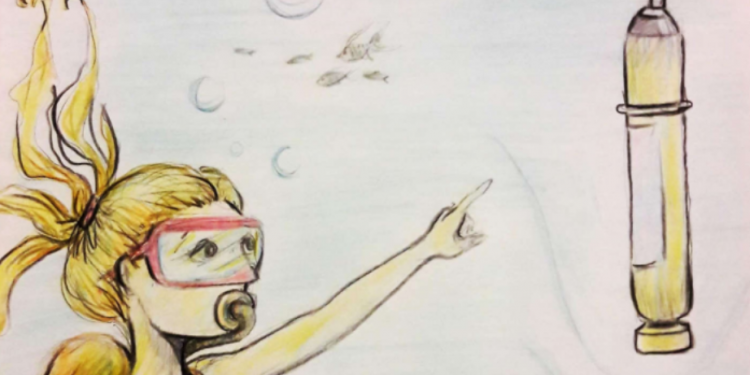 Devon Robinson’s daughter Millie inspired the main character of her book “Ocean Adventures with Millie and Sam.” Here, Millie points to an Argo float as it collects information to help understand ocean dynamics like temperature and salinity. (Illustrated by Devon Robinson for “Ocean Adventures with Millie and Sam”) Download Image February 23, 2022

A father pleads with his son to climb into bed. The son reluctantly abides but asks for a bedtime story in exchange. It’s a classic scene, but in this reimagining the two are water droplets and the story the father tells is of a process that carries water across the globe, from the atmosphere to the deepest parts of the ocean.

“It all started when I was way up in the sky inside a cloud,” the father begins. He goes on to describe falling from the cloud to the Arctic’s deep ocean, then traveling the currents for many years until he eventually emerges among a pod of dolphins off the coast of the United States.

The father’s adventure is a first-person account of meridional overturning circulation, a process that describes how water – as well as heat, salt, carbon, and other nutrients – moves between ocean basins. His journey is captured in a children’s book, called “A Water Drop’s Bedtime Story,” written and illustrated by nuclear engineering student Luke Wells as part of an assignment for a class taught by Dr. Annalisa Bracco.

“I never imagined writing a story about that, and I am a physicist,” Bracco said.

Bracco is a professor of climate science and oceanography at the Georgia Institute of Technology (GA Tech). In addition to teaching, Bracco is an oceanographer and physicist. She is part of a research team studying the genetic connectivity of corals in the deep ocean of the Gulf of Mexico. The project was funded by the NOAA RESTORE Science Program with a $1.3 million award in 2017 .

For the past three years, Bracco has asked students of her mini-mester course on deep-ocean science – a shortened course for students from a variety of majors – to produce creative products inspired by the class. Previous students have produced paintings, videos, and children’s books.

“One of the things we try to get them to do is to communicate and express themselves, and there is nothing that tells me more if they understood something or not than seeing them trying to reach children or much younger people,” Bracco said.

Why I write so much about Estonia