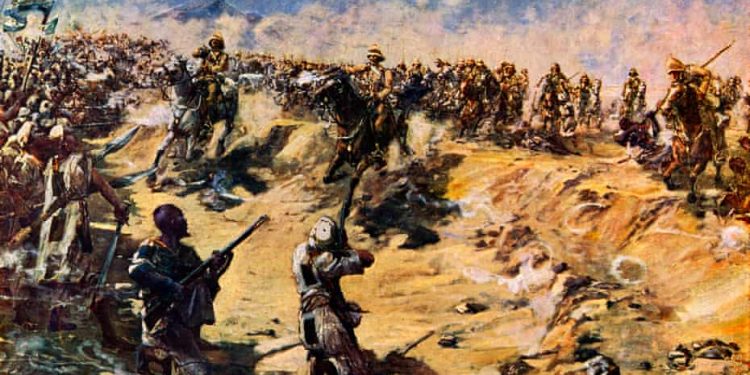 Museum officials in Sudan are hoping for the return of priceless artefacts and body parts taken by British soldiers, colonial administrators and travellers, saying they could help bring peace to the unstable east African country.

The items include valuable armour, weapons and clothing, and the banners of fighters who resisted the British force that invaded and colonised Sudan 124 years ago.

The most controversial items may be two skulls taken from the battlefield where Sudanese warriors tried to hold off the advancing British and Egyptian army. During the engagement at Omdurman in 1898, British commanders used early machine guns and artillery to inflict thousands of casualties on lightly armed enemies.

In Khartoum, the repatriation of the human remains of those who fought at the battle is seen as particularly significant.

“We have to have a big campaign. These people are our brothers, our heroes. They unified and defended our country. It is a very special story of resistance to imperialism … Their descendants should see this all here,” said Dr Eglal el-Malik, the director of conservation at the National Corporation for Antiquities and Museums.

Trophy hunting on battlefields by British soldiers was common during colonial campaigns and there are thousands of items from Sudan in British collections. The victories there were of particular significance to Victorian Britain as they were was seen as avenging the murder of General Charles Gordon in Khartoum 13 years earlier. Colonial rule by the UK lasted until 1956.

The two skulls, held by the Anatomical Museum in Edinburgh, were taken by Henry Wellcome, the pharmaceutical pioneer and businessman, and are among large numbers of human remains removed by western Europeans from Africa. These were often used in pseudo-scientific research to support racialist theories during and immediately after the rush to colonise the continent at the end of the 19th century.

Other items in British museums linked to the battle of Omdurman include a banner of leaders of Sudanese fighters, now in Durham University’s Palace Green Library, and a spectacular padded coat and armour in the Royal Armouries collection.

Many other museums in the UK hold similar objects taken in the aftermath of the British victories. Sudanese officials said they would like to see many of the items on display in a new museum to open in Omdurman in the coming weeks, which will tell from a new perspective the story of how the British colonised Sudan.

“I want to show the real detail of the battle of Omdurman and I cannot do that without all the items. It is very important for the Sudanese people to know,” Ahmed Mohammed, a curator, told the Guardian.

Mohammed insisted that the museum – being restored with a British Council grant – could provide adequate security and the right conditions for any artefacts returned from the UK or elsewhere.

Some items are already back in Sudan. A British family whose ancestors took items from the Omdurman battlefield recently returned a Sudanese “dervish” warrior’s robe.

But all concerned recognise significant practical and legal obstacles. El-Malik said she was against hasty repatriation of items.

“There are lots of Sudanese [people] want these items back now [but] they need to be aware of the legal issues. The reality is we have so many difficulties [in Sudan]. It would be great if we had all these things back now but [they are] in a good situation where it is and so many people see it. So we have to be reasonable.”

A spokesperson for Durham University said a final list of loan requests from Sudan was still under discussion. “We work closely with the National Corporation of Antiquities and Museums in Sudan, including currently on loan requests for several items from the Sudan Archive to be displayed in Sudan. They and we recognise this is not without difficulties,” the spokesperson said.

Prof Tom Gillingwater, of the Edinburgh Anatomical Museum, said the institution worked with many communities around the world to facilitate the return of remains and artefacts but it had not yet received any formal request for the return of the Omdurman skulls.

“Anatomical remains are now utilised for research into the history of genetics, diets and the movement of people. We take our colonial legacy – and its contemporary impact – very seriously, and are continuing to examine ways to address these important issues,” he said.

El-Malik described those in charge of British museums as “friends, colleagues … [and] very helpful on the whole”.

There are huge numbers of archaeological and other valuable items from Sudan overseas, including a bust of the Roman emperor Augustus that is in the British Museum, and a priceless collection of gold jewellery looted from royal tombs by an Italian adventurer in the 1930s, which has ended up in Germany.

The issue of restitution of heritage items taken by force or otherwise removed by colonial invaders, administrators and adventurers is a sensitive one, with pressure on western institutions mounting in recent years. Last year Germany became the first country to hand back Benin bronzes looted by British soldiers in the late 19th century. France has also indicated a significant shift in policy.

Sudan has been wracked by conflict for decades. A military coup last year dashed hopes of a swift transition to democracy after the fall of the veteran dictator Omar al-Bashir in 2019.

Sudanese officials stress they are not seeking the return of any archaeological objects that went overseas under lawful agreements, or any items they could not keep safe.

The National Museum in Khartoum is being rehabilitated with a $1m grant from the Italian government. Work is also being done on a museum in the south-western region of Darfur.

“The situation here is not suitable. For the moment they should stay where they are, but of course eventually we would like to have them in our museum,” said Ghalia Gharelnabi, the acting director of the National Museum.

‘We couldn’t stand it’: the Ukrainians travelling for days to flee Russian bombs and rockets