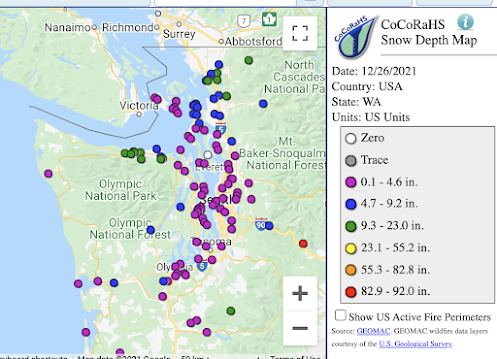 As predicted, the cold air pushed into western Washington, with the arctic front on the leading edge, with highly variable snow depths reported at 7 AM this morning (see Cocorahs snow map below).

Cold air entered Bellingham yesterday leading to lots of snow (4-15 inches reported), and as the cold  air pushed southwestward later yesterday, the northern Olympic Peninsula area areas (e.g., Sequim to Port Angeles) got hit hard, with up to around a foot of snow.

Over Puget Sound, most of the snow action was with the arctic front this morning, with 3-5 inches being reported.  The radar image at 7:37 AM this morning clearly showed the intense arctic front snowband (yellow colors) pushing southward.  The high-resolution models got this feature essentially correct.

The current observations show tremendous temperature and wind variability across the region (see surface map at 10 AM, click on I’m age to expand).  The leading edge of the arctic front is now (11 AM) around Olympia (blue line), with northerly flow behind it and southerly flow in front of it.  The convergence of air into this feature causes upward motion and precipitation.

In a stunning visible satellite image at 11 AM, you can see the front edge of the arctic front approach Hoquim (see below).

At Bellingham, the temperature this morning was 10F, with winds gusting to 56 mph.  Severe windchill for this region:  equivalent to -18F!  Temperatures below 10F are also moving through Omak and the Okanagan Valley into eastern Washington.
There will be some light snow today, producing perhaps another inch and then it will clear out tonight, allowing cooling (infrared radiation to space).  Temperatures should drop into the upper teens from Puget Sound northward, with lower temperatures over Northwest Washington.  Even colder over eastern Washington.    This is the cold that has been advertised for the last several days.
Seattle DOT and Washington DOT need to remove as much snow as they can from the roadways, between any snow will turn to ice during the next 24h, as heat from the roadways initially creates a melted layer near the surface that will subsequently freeze.  And chemical treatment as well.
Icy roadways are the greatest weather killer of Washingtonians…..WAY more than heat waves, something you may not hear about in the media.  The truth is that cold weather is a far greater killer in our region than heat waves.
The Potential Thursday Storm
With cold air entrained over the region, we will be very vulnerable to potential snow.  On Thursday morning, a low center and front be approaching our region, with cold air in place (blue colors in figure below).  There is still some uncertainty with this feature, so I need to be careful in talking about it.

The current UW model run puts down substantial snow, but there is a large snow gradient across the Sound (the result of Olympic rainshadowing and temperatures on the edge).  Around 2 inches over Seattle.

The European Center model is going for more, but has the same general idea.

In Vilnius, creativity cannot be masked