The Cold/Snow Forecast is Now Much Clearer 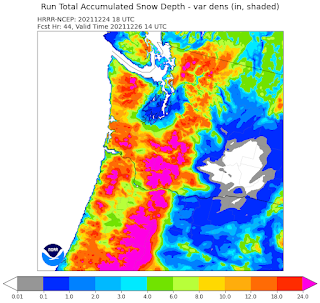 As we get closer to an event, very powerful tools become available to meteorologists:  high-resolution model predictions, high-resolution ensembles of many forecasts, the NOAA/NWS HRRR model, to name only a few.

And forecast skill obviously improves as we get closer to the event.

So based on all this technology, and decades of experience in predicting Northwest snow, let me provide you with the latest update.

The temperatures are too warm for snow over the lowlands today, with the current freezing level approximately 2300 ft.  The snow level (the level at which all snow is melted) is about 1000 ft lower (1300 ft).

Near-surface temperatures will remain above freezing throughout the night and Saturday morning/early afternoon.   Temperatures will be a bit colder around Bellingham as cold Fraser River air starts to move in.

But around 4 PM tomorrow (Dec. 25th), all hell will break loose as Arctic air pushes energetically through the Fraser River Valley into NW Washington.  Temperatures will rapidly fall below freezing in western Washington, with gusty winds from the north. Arctic air will also push south into eastern Washington.

Trust me…you will know this is happening….the equivalent to being hit by a meteorological sledgehammer.

Here are the daily high/low predictions from the European Center model for Seattle.  By Monday, a high of 24 and a low of 19F, with the lows cooling a bit the next few days, followed by warming at the end of the month.

Spokane (and eastern WA) will be much cooler, with highs in the teens, and lows falling below zero.

The UW high-resolution ensemble system, with the WRF model run many times with small differences in its starting point and physics, is a powerful tool for looking at uncertainty.  Below are the forecast temperatures at SeaTac, time is on the x-axis and 00Z/26 is tomorrow at 4PM.
You can see the big plunge around 4 PM. Some uncertainty, but all runs show rapidly falling temperatures (the black line is the average of all the runs).    A drop to the upper teens.

An even higher resolution forecast run is taking the temperatures 5-10 F lower still in some western Washington locations away from the water.  Cold spots in the west will probably drop to 10-15F.  We will probably experience the coldest temperatures since 2010 when it got to 14F.
Snow
No lowland snow today of any importance (if you are above 500 ft you might see some errant snowflakes).  The same will be true overnight, except for some very, very isolated heavy snow showers.
Most will wake up to experience a snowless Christmas morning. You might see some snowflakes mixed in the precipitation and perhaps some very wet snow that rapidly melts.
But then, as the cold air moves in during the late afternoon, all precipitation will turn to snow.
The trouble is that there won’t be much precipitation.
The snowfall map through 4 AM Sunday, shows as much as 4 inches from Everett southward for western WA.

But the predicted snow DEPTH on Monday morning at 4 AM, after another 24 h of scattered showers, is unimpressive.  Yes, the ground will be white around Puget Sound, but generally less than .06 meters (about 2.5 inches).  Not big snowfall that kids (both young and old look for).

The origin of the lack of precipitation is a subtle one.  The upper-level trough associated with this event is directed too far southward, moving the greatest upward motion (which produces precipitation) to our south (see the upper level–500 hPa pressure level–for 4 PM Saturday below).

Leonardo Badea (BNR): On the role of the interest rate corridor in the operational framework of monetary policy in Romania