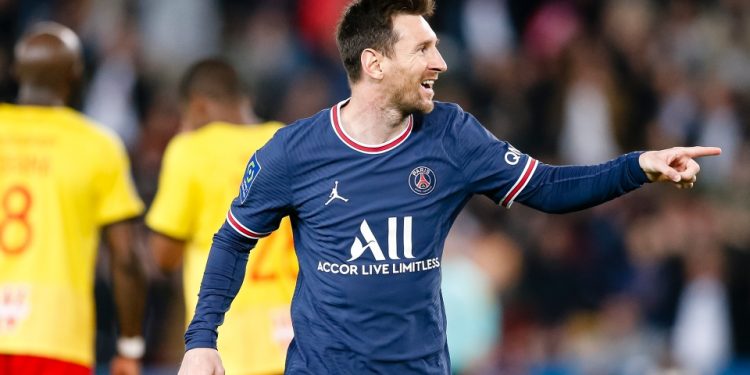 Lionel Messi scored a magnificent goal for Paris Saint-Germain on Saturday that helped his side wrap up the Ligue 1 title.

The hosts needed just one point to get their hands on the trophy, and managed to do so with four games to spare.

Mauricio Pochettino’s men played out a 1-1 draw against Lens at the Parc des Princes with Messi on target, as the former Spurs boss secured his first Ligue 1 title.

Messi, 34, also secured his first trophy since leaving Barcelona, and curled an unstoppable effort beyond Lens shot-stopper Jean-Louis Leca to put his side 1-0 ahead.

It was, however, cancelled out by Corentin Jean’s strike late on, but it did not matter, as PSG triumphed.

If anyone was going to break the deadlock it would be him! Simply MAGNIFICENT!

Is that the goal that wins the title?

There were jubilant dressing rooms scenes at full-time, with champagne in full swing, and beers being brandished around, after PSG lifted their eighth league title in the last ten seasons.

“I wasn’t there, but there was a bit of champagne sprayed around! But most of all I’m happy for tonight and the title which is the most important”, said Neymar on PSGTV.

“Yes, it was a very hard and long season with everything that happened. But today we managed the victory in the League and that was really important for us.

Liverpool v Everton LIVE: Away side make strong start, Mane lucky to be on pitch

Pochettino did not escape a drenching as he appeared delighted to win the league title – the first of his management careerIG: @psg

“Now we need to breath, to calm our heads down which is the most important.”

Kylian Mbappe and Presnel Kimpembe were two of the first players to grab bottles of bubbly and unleash the chaos in the dressing room post-match.

They were encouraged to wet boss Pochettino and he ended up jumping and singing as the celebrations began.

Messi posed for photographs with many players and in particular PSG’s Argentinian stars.

In an image published on social media by his teammate Leandro Paredes, Messi is seen with Angel Di María and Mauro Icardi holding a bottle of beer.

Despite the scenes at full-time, PSG’s ultras were annoyed by the club’s Champions League exit to Real Madrid.

Pochettino has found himself in the spotlight amongst the clubs fans and has become an unpopular figure of late.

It resulted in them leaving the stadium 15 minutes before the final whistle on Saturday, rather than staying for the celebrations.

Pochettino, whose future remains in doubt, was linked with the Manchester United job, only for United to favour Erik ten Hag.

He was quizzed about the matter on Friday ahead of the clash against Lens, but avoided being drawn on the subject.

“All the rumours throughout my football career have never really affected me,” Pochettino said.

“When I have been in charge of Southampton, Tottenham and now PSG, I have always been fully committed. Rumours are rumours, we don’t need to pay attention to them now.

“We know they exist and they are generated on a daily basis. As always, we are focussed on our job at the club.”

It remains to be seen if Pochettino will remain in the French capital beyond this summer, or whether he makes a return back to the Premier League.

Covid-19 in Central Europe: No appetite for lockdown