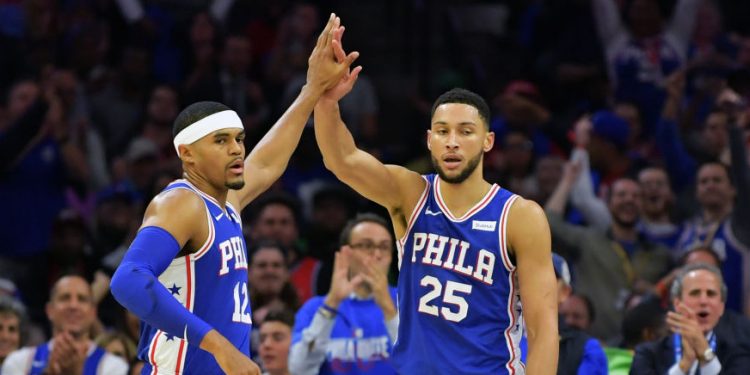 The Philadelphia 76ers have spent six months trying to find a Ben Simmons trade, but there are real questions to be asked about how they seemingly keep making life harder on themselves in trade discussions. After initially demanding a James Harden-like return of players and draft picks, the Sixers eventually seemed to settle on the need for an All-Star caliber player in return.

That is at least somewhat reasonable, but as the trade deadline looms, Daryl Morey apparently can’t help himself when it comes to upping the difficulty level of dealing Simmons. On ESPN’s The Hoop Collective podcast, Marc Spears and Brian Windhorst both said they have heard that Morey is trying to attach Tobias Harris to Ben Simmons trade talks, as Philly appears ready to move on from the disappointment of Harris’ stagnation after giving him a max deal.

Lol if you can’t give us an all star, you gotta take Tobi pic.twitter.com/pMDWAsucIK

Harris makes $36 million this year, with two years left beyond this season worth nearly $77 million, while Simmons makes $33 million this year, with three years left beyond this season worth north of $113 million. That’s a lot to be asking another team to take on, which Spears audibly chuckles at and the two imagine Hawks GM Travis Schlenk’s reaction to getting that call that they want Atlanta to take both players on.

They aren’t alone in thinking that attaching Harris to Simmons is a preposterous ask, as Kyle Kuzma saw the report and couldn’t help but laugh at the idea of trying to ship “$80ms” out in one package.

How the hell you package 80ms

If this tells us anything, it’s that we probably shouldn’t expect a Ben Simmons trade by the deadline barring an unforeseen change in how Morey places value on Simmons. If he won’t settle for “potential All-Star and assets” without demanding the other team take Tobias Harris back too, then it seems a deal won’t be coming any time soon.

Jack Dorsey: the outgoing Twitter CEO with an artist’s vision

What can emerging Europe expect from the EU’s Vietnam trade deal?