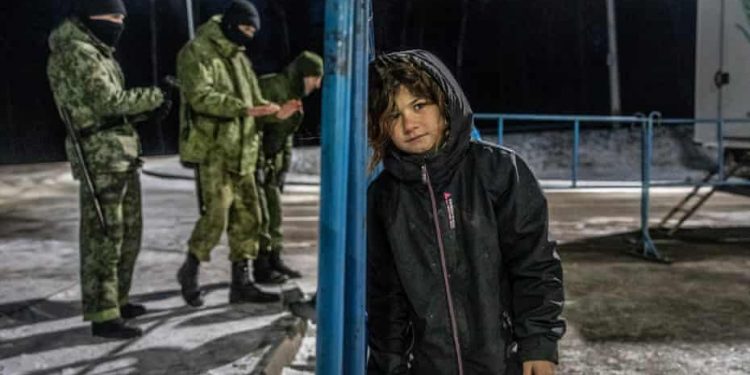 The giant warehouse towers over the Belarus countryside, less than a mile from the Polish border. In this 10,000 sq metre space patrolled by dozens of armed soldiers, 1,000 asylum seekers are crammed among countless industrial shelving units, held up on their way to Europe in the midst of a frigid winter.

“We’re trapped in this building,” says Alima Skandar, 40. “We don’t want to go back to Iraq and we can’t cross the border. Please, help us.”

What was a customs centre in the village of Bruzgi has been turned into a dormitory for asylum seekers. The EU has accused Belarus’s leader, Alexander Lukashenko, of deliberately provoking a new refugee crisis by organising the movement of people from the Middle East to Minsk and promising them a safe passage to Europe. Lukashenko’s critics say the exploitation of these people is a callous reprisal for sanctions that Brussels has imposed on his regime.

Last autumn Skandar, her husband and their four children arrived in Belarus on a flight from Iraqi Kurdistan and then camped for weeks surrounded by barbed wire that Poland had erected along its border.

Early in November, Belarusian authorities escorted thousands of asylum seekers to the Polish frontier in an escalation of the crisis. Witnesses told the Guardian how Belarusian troops gathered groups of up to 50 people and cut the barbed wire with shears to allow them to cross. Hundreds managed to evade the Polish police by hiding in the forests. Others were caught and pushed back violently to Belarus by Poland’s border guards.

On 6 November, during a harrowing attempt to cross the frontier, Skandar was separated from three of her children, whose ages range from 13 to 20.

“When the Belarusian soldiers cut the barbed wire, hundreds of us moved toward the border,” Skandar says. “Three of my children were in front and ran for the forests across the border. My husband, our youngest child and myself were left behind. The Polish police seized us and sent us back to Belarus.

“I haven’t seen my children since that day,” she adds, beginning to cry. “I hope they’re OK.”

As the days passed, the crisis grew more concerning, with Polish police using teargas and water cannon against people attempting to cross, and the EU adding new sanctions against Belarus. As temperatures plummeted, Belarusian authorities began to move the asylum seekers to the warehouse in Burzgi.

Inside, on shelving units once used for merchandise, people have built makeshift cots using wooden planks and cardboard boxes. There are dozens of children and elderly people, many in need of medical help.

Outside, other people sit around a wood-fuelled structure used to heat food and water. The water is for the showers, which are located out in the snowy cold. Temperatures in Bruzgi can reach as low as minus 12C.

The majority of people in the camp come from Iraq’s autonomous Kurdish region, where on 3 December an attack by Islamic State militants killed three civilians and 10 Kurdish soldiers.

Occasionally, groups of people, mainly in their 20s, attempt to cross the border in the cold. Some make it, others don’t. At least 19 people have died since the beginning of the border standoff. Most of them froze to death. Some of their bodies were sent back to their home countries from Minsk alongside dozens of people forcibly repatriated by Belarusian authorities or who decided to return voluntarily.

Ebrahim Naman, 20, watches his peers plan their next attempt to cross the frontier. He hopes for a different solution, as for the past two years, since an accident in his home country, Naman has been in a wheelchair. He has undergone several surgeries on his back, and doctors have told him that new rehabilitation techniques in Europe could help him to walk again. For weeks, Naman has camped with his family in front of the barbed wire, hoping to be allowed in. Unable to make his way through the forest in his wheelchair, six people carried him along on a bedsheet.

“My son must make it to Germany,” says his father. “He needs medicines every day, and there are none here. I hope that Europe does something to help people like him who need urgent medical attention.”

A rumour have been circulating in the warehouse for weeks that Germany will take in these people before year’s end. It has not been corroborated.

A 32-year-old woman from Syria says she would rather “die on the spot from a bullet or the cold” than go back. She arrived in Belarus on 28 October on a direct flight from Damascus with her mother and husband. Her mother had a kidney transplant and is in need of medical assistance.

“She was a nurse in a state hospital in Idlib where, among other things, she looked after the injured in the army,” her daughter says. “As a result, the opposition started to perceive her as a traitor and supporter of the regime and our properties were confiscated.”

The woman says her brother, who lives in Germany, is trying to get them out of here through an asylum organisation, and booked an appointment at the embassy to submit applications, but Belarusian authorities told them that if they left the camp they would not be allowed to return.

On 26 November, during a visit to Bruzgi, Lukashenko promised that Belarus would never play politics with refugees’ lives. “Whoever wants to move westward, it is also your right,” Lukashenko said in a speech that was translated in Arabic. “We are not going to keep you behind barbed wire or beat you.”

The warehouse occupants say that generally Belarusian soldiers are not mistreating them – except for one man, a tall soldier in a black uniform, who is said to be one of the heads of the troops at the camp. “He is the most evil,” a man from Iraq says. “We often see him beating children.”

The border checkpoint of Kuźnica is about 500 metres from the warehouse. There is little evidence now of the people who camped there for months, just a pile of rags and bottles. On the Polish side, an EU symbol is visible but out of reach.