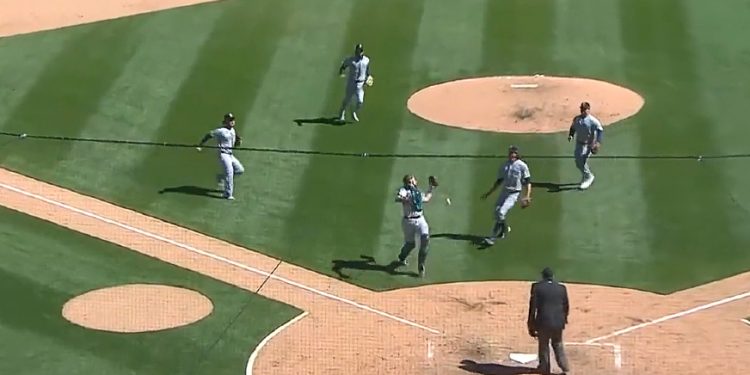 Chicago is aptly named “The Windy City,” and in baseball we typically hear about the howling winds at Wrigley Field, where a day where it blows out can lead to tons of home runs, and days it blows in can lead to a pitcher’s paradise.

The wind still blows on the Southside, too, and the White Sox took advantage of a blustery Thursday afternoon with one of the funniest sequences you’ll see all year in Major League Baseball. With two outs in the bottom of the fifth inning, the White Sox trailed 2-0 when Adam Engel skied a ball straight up in the air, causing chaos for the Mariners infield who moved back and forth trying to track it in the wind, ultimately leading to a drop by the catcher and Engel reaching second on the error.

The very next batter was Jake Burger, who likewise sent a baseball straight up in the air and had the wind drive the ball from straight over the pitcher’s mound to out by shortstop, where it was dropped again as Engel calmly rounded the bases and scored.

It is a hilarious way to score a run, as the two pop-ups couldn’t have traveled much more than 100 combined feet but they managed to manufacture a run out of just those two swings to cut the Seattle lead in half.