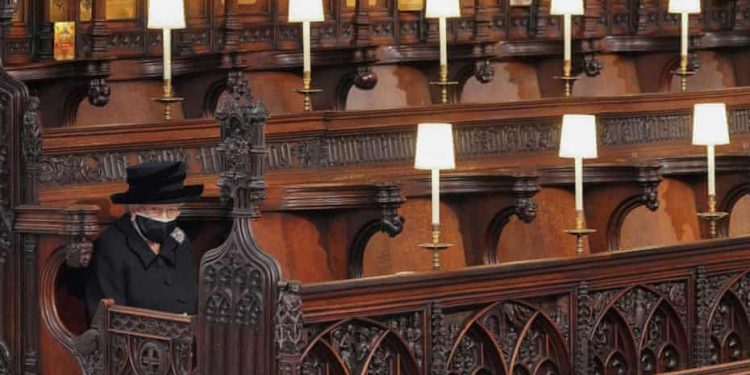 Staff inside Downing Street held two staff leaving events featuring alcohol, and one with loud music, on the evening before Prince Philip’s funeral in April last year, when such social contact remained banned, according to new allegations reported on Thursday.

Eyewitnesses told the Daily Telegraph that a combined total of about 30 people took part in what appeared to be social events in different parts of Downing Street, before both gatherings combined in the garden.

According to one attender, a staff member was sent with a suitcase to the Co-op on the Strand, a short walk away, returning with the case filled with bottles of wine.

Philip’s funeral took place in the private chapel at Windsor Castle the next day, Saturday 17 April, with the Queen sitting alone to maintain social distancing.

Boris Johnson was not at Downing Street that evening, having gone to the prime ministerial country retreat, Chequers, on the Thursday evening and remaining into the weekend.

At the time, England was in stage two of the government’s gradual relaxation from lockdown. Up to six people or two families could meet outside, while indoors, people could only socialise with their household or support bubble.

The claims are set to heap yet more pressure on the prime minister, who is facing calls to resign, including from some of his own MPs, after admitting he took part in an event in the No 10 garden in May 2020, during the first Covid lockdown.

Andrew Bridgen, a Conservative MP who supported Johnson when he successfully ran as Tory leader, announced he has handed in a letter of no confidence in the prime minister and called for him to leave within three months.

The leading Brexiter, who campaigned alongside Johnson during the referendum in 2016, told the Telegraph there was a “moral vacuum at the heart of our government”.

Bridgen joins four Tory MPs, including the leader of the Scottish Conservatives, Douglas Ross, who have openly called for Johnson to resign.

Conservative party rules say that if more than 15% of the party’s MPs, currently 54, submit letters to Graham Brady, the chair of the 1922 Committee, there has to be a vote on the leadership. Should Johnson lose such a vote, a leadership challenge would ensue in which he could not take part.

One of the events last April marked the departure from government of James Slack, who was the prime minister’s official spokesperson under both Theresa May and Johnson, before becoming Johnson’s director of communications, according to the Telegraph. He is now deputy editor of the Sun.

The other leaving event was for one of Johnson’s personal photographers, the paper said. Witnesses told the Telegraph that the event to mark the photographer’s departure mainly took place in the basement area of No 10, with loud music playing.

Both groups reportedly moved outside around midnight, with drinking carrying on into the early hours of the morning. While in the garden one attender broke a swing belonging to Johnson’s infant son, Wilfred, a witness told the paper.

A Downing Street spokesperson said, in relation to Slack’s departure: “On this individual’s last day he gave a farewell speech to thank each team for the work they had done to support him, both those who had to be in the office for work and on a screen for those working from home.”

Ed Davey, the Liberal Democrat leader, reiterated his call for Johnson to step down, saying: “The Queen sitting alone, mourning the loss of her husband, was the defining image of lockdown. Not because she is the Queen, but because she was just another person, mourning alone like too many others. Whilst she mourned, Number 10 partied. Johnson must go.”

The Scottish National party’s Westminster leader, Ian Blackford, said: “Boris Johnson has to go – and he has to go now. He broke the rules and presided over an arrogant culture of one rule for the Tories and another for the rest of us. Tory MPs have a duty to remove him from office. It is their integrity on the line – and they won’t be forgiven if they refuse to act.”

UK’s economy ‘not out of the woods’ after lockdown, Bank of England policymaker warns