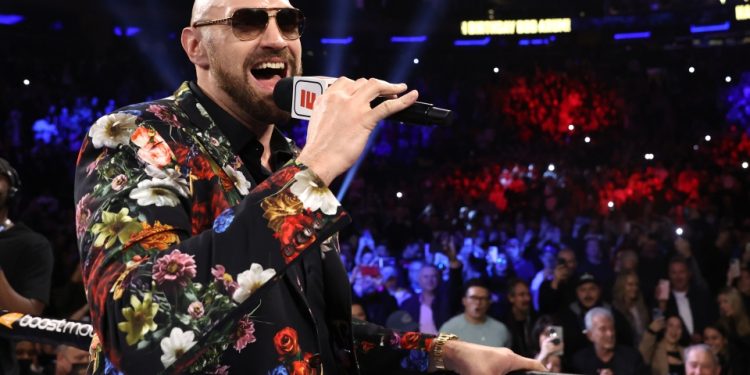 The WBC heavyweight champion was recently mentioned by the UFC heavyweight king as a potential future opponent for when he inevitably switches to boxing.

Fury likes the fight with NgannouGetty

Who would like to see me fight this beast boxing rules @ufc gloves?@danawhite @francis_ngannou pic.twitter.com/xONNoT8NzR

Ngannou insists this sport switch will happen one day.

And now Fury has welcomed the idea, posting a hypothetical fight poster on social media.

Fury captioned the tweet on Thursday: “Who would like to see me fight this beast – boxing rules, UFC gloves? @DanaWhite @Francis_Ngannou.”

Ngannou is set to defend his title against Ciryl Gane in the octagon on January 23 at UFC 270 but after that, his future is unclear.

One thing he says he knows for certain, though, is that he will eventually compete in the boxing ring.

“It’s always been down the line,” Ngannou told TMZ this week.

“This is something I’m not taking my eyes off of. It’s gonna happen, either way.

“Even if/when the UFC and I finalise a deal, the boxing part has to be into it because I can’t see myself retiring without boxing.”

Fury is the WBC heavyweight championGetty

Currently Fury and Oleksandr Usyk sit at the top of heavyweight boxing.

Fury retained his WBC title by knocking out Wilder in their trilogy fight last year, while Usyk claimed the WBA, IBF and WBO belts by dethroning Anthony Joshua.

However, of the four top heavyweights, hard-hitting Ngannou only seems to have his eyes on two.

Wilder is plotting his return following his defeats to Tyson Fury, though has also hinted that he could retireFrank Micelotta/FOX

“Tyson Fury, Deontay Wilder,” he said, “I would like to test myself to that level.

“It’s not the same sport, although I’m the champion, I’m in the top in this division.

“At the end of the day, it’s just about like trained hands, trained punches, having a good delivery system to produce bombs and I’m sure that if I deliver my own punch, it’s pretty good, I can make some damage.”

‘Is there a problem you want to solve?’: how to get a place on a tech master’s programme