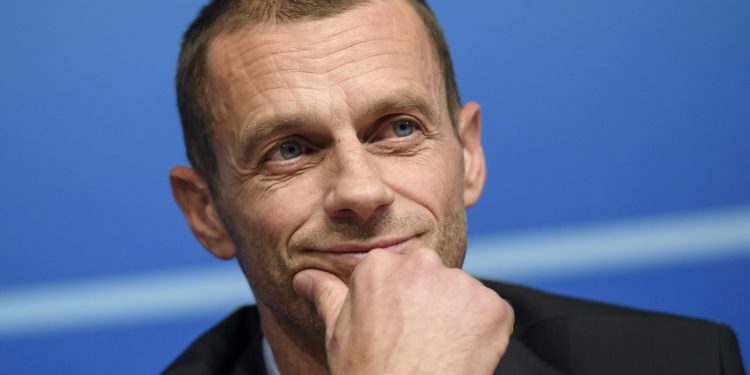 NYON, Switzerland — For Aleksander Čeferin, having eyes in the back of his head was essential this year in European football.

Čeferin, the UEFA president, found himself in the vortex of a tumultuous year for the world’s most popular sport, first fighting off a breakaway Super League proposal by some of Europe’s megabucks clubs and then pushing back against an ongoing bid by FIFA — world football’s governing body — to increase the frequency of the World Cup, which would deal UEFA a savage blow.

While the biennial World Cup plan would upend the football calendar, the Super League plot — which is now being considered by the Court of Justice of the European Union — was an existential threat to the governing structure that has underpinned football on the continent for decades.

And at the center of both disputes was Čeferin, establishing UEFA as football’s most powerful governing body, with allies in key strategic national governments and at the heart of the European Union.

In an expansive interview at UEFA’s lakeside headquarters in Nyon, Switzerland, Čeferin relaxed in an armchair and discussed a range of political and football issues: the Super League, the biennial World Cup, Belarus, Slovenian democracy.

Lake Geneva shimmered behind him in the cold sunshine and across the water, Mont Blanc dominates the horizon. To Čeferin’s left in the office, there was a flip chart featuring a cartoon of SpongeBob SquarePants, drawn by one of his three daughters.

Čeferin groaned as he recalled the feverish two days in April when the Super League was launched by 12 of Europe’s top clubs and then collapsed under a tsunami of supporter outrage and political opposition. “I didn’t sleep, eat or drink for 48 hours, because I had phone calls with governments and royal families … and pressures and threats.”

“The Super League was the worst because it was a personal betrayal by a person that I thought was my friend,” he said of Super League instigator Andrea Agnelli from Juventus, whose daughter Čeferin is godfather to. At the height of the row, Čeferin publicly called Agnelli and his fellow plotters “snakes.”

The original iteration of the rebel plot was defeated by a combination of fan backlash and political pressure from national capitals including Paris and London.

Super League officials have since accused UEFA of acting as a regulator, dominant operator and unique gatekeeper in European football, a case that is being considered by Europe’s top court in Luxembourg — where at least 15 EU countries have backed UEFA’s position in the legal dispute.

Then, during the summer’s Euro 2020 tournament, which was delayed a year by the coronavirus pandemic, FIFA blindsided UEFA with its proposal to increase the frequency of the World Cup — global football’s premier international competition — from every four years to every two years.

It’s a plan which Čeferin is scathing of. He called it “populistic bullshit,” and said it would harm European football federations and “cannibalize” women’s football.

“The biennial World Cup is a political move because FIFA tries to weaken the European associations, take money from them and distribute it elsewhere because that’s politically appealing,” he said. “The project is an absolute no-go for us.”

In a statement, FIFA said the proposal is designed to “grow the sport of football around the world” and hit back at UEFA’s criticism.

“Sporting imbalance is growing and FIFA has a duty to think of ways to tackle this issue,” the world governing body said. “It is possible that UEFA simply fears that its own commercial interests might be affected — which will not happen. Once again, the position of UEFA on the matter appears to be driven primarily by protectionist and selfish instincts.”

Čeferin, who likes to relax with a glass of Johnnie Walker blue label and enjoys British TV drama Peaky Blinders, is exasperated with it all.

“If I survived this year,” Čeferin sighed, “I will survive many more.”

But 2021 hasn’t been a year of universal acclaim for Čeferin.

He was criticized during the summer’s Euro 2020 competition for UEFA’s refusal to allow the city of Munich to light up its stadium in LGBTQ+-friendly colors, in response to an anti-gay Hungarian law. And UEFA also came under fire for awarding the hosting rights for a women’s under-19 tournament to Belarus in 2025.

The Belarus decision is weighing on Čeferin and he hinted at a U-turn, as authoritarian leader Alexander Lukashenko continues a crackdown on the country’s opposition and pushes migrants toward the EU border in what Brussels has called a “hybrid attack.”

While Čeferin stressed that the Belarusian football federation has no connection with the Lukashenko regime and tries “tirelessly” to promote women’s football, he acknowledged the “terrible situation” in Europe’s pariah country.

“If democracy is on the level that it is today, it would be absolutely impossible” to hold the tournament in Belarus, Čeferin said. “If this continues, we simply cannot go there.”

UEFA is monitoring the Belarusian situation and, while it has no “concrete deadline” for a decision, the matter will be discussed before next May’s Congress in Vienna.

After Slovenia achieved its independence from Yugoslavia, Čeferin followed in his father’s footsteps and became a lawyer — where, in one role during the early part of his career, he defended former Yugoslav soldiers whose pensions were removed by the government — before climbing the ranks of football administration.

Čeferin bit his tongue when asked about the current state of Slovenian politics and his nemesis, Prime Minister Janez Janša — who comes from the same small central Slovenian town of Grosuplje — but offered a broad critique of Slovenian society.

“In Slovenia we’ve never been so divided. There was never so much tension. There were never so many insults through social media and other media who are clearly the media of a political party,” he said. “This is worrying but it will have to be solved by Slovenians and not the European Union.”

For now, Čeferin says he has no ambitions to enter domestic politics and tackle Janša on the national stage. “My humble opinion is that I can help the world much more here than from a political position in Slovenia,” he says, confirming that he will seek another term as UEFA’s president in 2023.

Aside from peace and goodwill to all in European football, especially himself, Čeferin had one final wish for 2022. “No more bloody COVID.”

Katie McCabe: ‘I thought my Arsenal career was over and I got a lifeline’