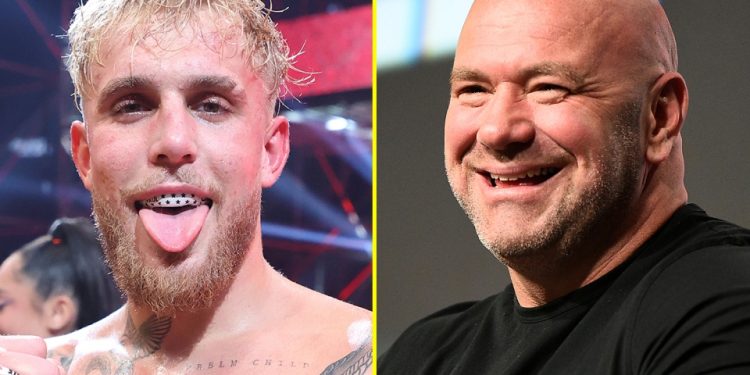 Dana White responded to Jake Paul’s multiple attempts to take on UFC fighters with a challenge of his own.

The pair have been engaged in a war of words for some time, and has only intensified with Paul knocking out two former UFC stars.

The YouTuber-turned-boxer brutally KO’d both Ben Askren and Tyron Woodley and wants to take on some of the biggest names in the promotion.

The 24-year-old claims to be paid more than all the fighters in the UFC combined and has taken issue with how much money White pays his star athletes.

The insults are also often personal ones and Paul even dressed up as the UFC president for Halloween, while also suggesting he is a cocaine user as he was holding up a bag of white powder.

Jake Paul dressed up as the UFC president for Halloween@jakepaul

White has now responded to the YouTuber and made his own drug taking insinuations.

Jorge Masvidal and Nate Diaz are two names that are continuously mentioned by Paul, but both are under contract by the UFC and will not be happening.

“No [that’s not happening],” White stated. “You notice he wants to f***ing fight everybody that’s not in his weight class, guys that are older and all of this other bulls***. Go find a boxer. Go hump somebody else’s leg, you goofball.”