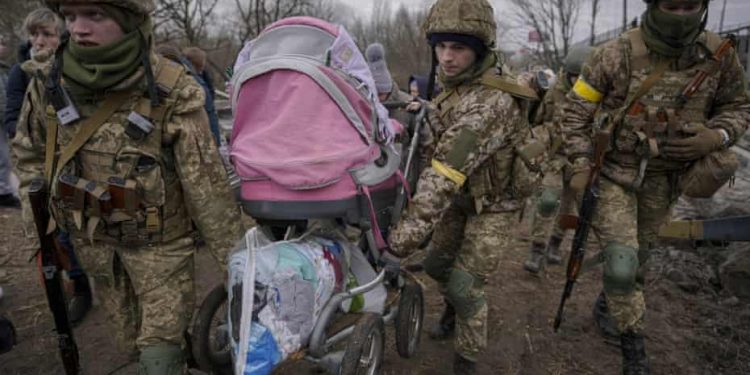 The Russian invasion of Ukraine has triggered the fasting-growing refugee crisis in Europe since the second world war, according to the head of the United Nation’s refugee agency, UNHCR.

The warning came as video emerged that appeared to show people trying to escape fighting in Irpin, just outside Kyiv, being shelled by Russian forces amid an evacuation that escorted 3,000 people away from the conflict the day before.

Vast numbers of Ukrainian civilians continued to flee cities under bombardment, including the besieged coastal city of Mariupol where Russian forces agreed again to allow an urgent evacuation.

With more than 1.5 million refugees from Ukraine reported to have crossed into neighbouring countries in the space of 10 days, the UN high commissioner for refugees, Filippo Grandi, warned after visiting the Moldovan border that the situation would only get worse.

“This will be a more complex situation,” he said, after having tweeted on Sunday: “More than 1.5 million refugees from Ukraine have crossed into neighbouring countries in 10 days.”

Officials said many of the refugees who had arrived in other countries had friends and places to go to, but Grandi said the growing tide of refugees would put pressure on governments to absorb them.

“These governments have done very well in their initial response. They were well prepared. But if the numbers continue to grow it will be a problem.”

Grandi’s warning came as shocking images were posted on social media that appeared to show civilians trying to flee Irpin, on the outskirts of Kyiv, coming under Russian shell fire.

In the shocking video, a Ukrainian home guard volunteer can be seen being asked about evacuations from Irpin as civilians with suitcases hurry along the far side of the street.

He is asked what happened the day before and begins describing efforts to evacuate “casualties … children and women”. As the man speaks, a shell lands near him, knocking him off his feet.

With huge queues of cars belonging to those fleeing the fighting jamming roads, and evacuation trains overcrowded with standing room only and not enough space for all those who want to flee, more than 3% of Ukraine’s population have become refugees.

In the besieged southern port of Mariupol on the Sea of Azov, where residents have described desperate conditions under Russian shellfire – including no electricity, food shortages and hospitals operating in basements – a second attempt to organise an evacuation was under way today.

Images posted on social media showed a convoy of evacuation buses leaving the city of Zaporizhzhia on Sunday bound for Mariupol.

The evacuation attempt on Saturday was halted after Russia shelled the bus depot, with the city’s mayor accusing Russian forces of a deliberate attack. “I’m absolutely sure,” said Vadym Boichenko.

“They got information where the [evacuation] buses are and started hitting the bus depot. Yesterday I said we have a humanitarian crisis. Today it’s genocide.”

Record numbers of refugees have crossed into Poland from Ukraine with the total number expected to surpass 1 million later on Sunday as Russian forces escalate their invasion.

Fresh data shows that Polish border guards cleared as many as 129,000 people at border crossings on Saturday, the most in a single day since the war started, bringing the total to 922,400.

“Check-in is as simplified as possible,” the Polish border guard spokesperson, Anna Michalska, said. “The point is to confirm the identity of persons, verify documents, check the databases if they are not wanted persons. It takes a few minutes.

“Forecasts indicate that today the number of people who entered Poland from Ukraine from 24 February will exceed 1 million.”

At the Medyka crossing, the busiest along Poland’s roughly 310-mile (500km) long border with Ukraine, refugees streamed past boxes of clothes laid out along a path from the border crossing while Scouts handed out hot tea, food and toiletries.

Some carried babies, others held dogs and cats wrapped in blankets. Many joined a queue for buses to the nearby town Przemyśl, where friends, relatives and volunteers waited to take them to other cities in Poland and beyond.

“In Kyiv there are many bombs and you sit in the basement and still hear it and because of that I left this city,” said Anna Klimova, 21, who was travelling to Wroclaw to stay with her brother. “It’s a really hard situation.”

Poland’s Ukrainian community of about 1.5 million is the region’s largest and makes the country a leading destination point for refugees, though fleeing Ukrainians also cross to safety through Slovakia, Hungary and northern Romania.