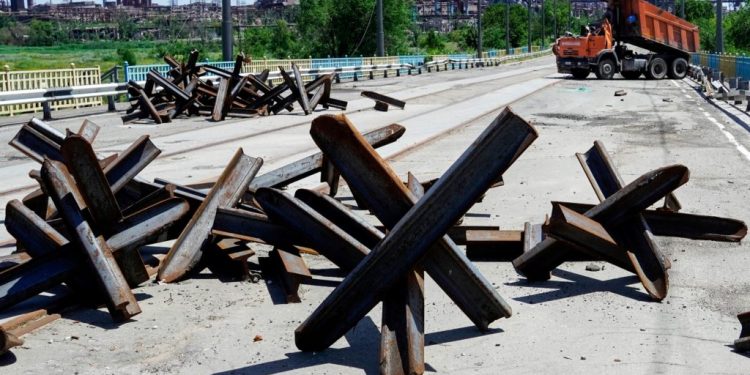 James Snell is a writer and researcher. He has written for Spectator World, Foreign Policy and other outlets.

British forces aren’t engaged in Ukraine. The country’s contribution to arming and training Ukrainian forces isn’t the largest either. And British aid doesn’t sustain Ukraine’s economy like that provided by its neighbors.

But despite all that, the United Kingdom occupies an outsized role in the war’s propaganda — on both the Ukrainian and Russian sides.

Ukraine’s ministry of defense recently put together a music video appreciation of Britain’s assistance. Meanwhile, on Russian state television, hosts complain about British intransigence and scheming, as they plot exactly how they’d destroy the U.K. with nuclear warheads and speculate about whether Foreign Secretary Liz Truss will be sent to hell for sanctioning the patriarch of Russian Orthodoxy.

In each case, this is overstatement. The U.K. isn’t Ukraine’s greatest ally, nor is it Russia’s deepest, most committed enemy. And amid all this war rhetoric — sometimes triumphantly issuing forth from the U.K. government itself — the British army’s capacity to do the job of defending the realm is generally assumed. But should it be?

Rather than crowing about the gulf between these beliefs and reality, however, an obvious possibility should be taken into consideration: that the armed forces of the rich world, and the NATO-sphere, have been making similar mistakes, or could do so.

The United States was protractedly defeated in strategic terms in Afghanistan, culminating in the humiliating collapse of August 2021. France — a NATO country that prizes strategic autonomy and has launched several military missions in the Sahel region of Africa in the last two decades — was thrown out of Mali by the junta there, and has been replaced in much of the region by the U.S. And African dictators are increasingly turning to more brutal, and more willing, Russian mercenaries.

Britain lacks the military capacity even for the independent action of France.

A recent book by Simon Akam depicts a British Army deficient in culture, leadership and funding. It’s a military chronically unsure of what it’s for. As Akam documents, Britain’s armed forces were hammered in Iraq and Afghanistan, and have faced over a decade of cuts and degradation.

A force sometimes conceptualized as the “best little army in the world,” in practice simply serves as a junior adjunct of the American armed forces. For example, during the last major engagement the British forces were in — fighting the Islamic State — Britain at one stage contributed only six active Typhoon fighter aircraft, with three more in reserve.

In the U.K., the army is a sticking plaster, depended upon by politicians to paper over cracks in other state institutions. Soldiers plan and deliver vaccination campaigns, drive heavy trucks when drivers are in short supply, and frequently assume the roles of creaking police forces under the aegis of the Civil Contingencies Act of 2004.

Last week, Boris Johnson grudgingly assented to raise defense spending by the end of the decade, which was initially forecast to fall to a scant 2 percent of GDP — the NATO minimum — by 2022. Johnson had held out for some time, despite being told publicly by the minister of defense that the country’s armed forces exist on a “diet of smoke and mirrors, hollowed-out formations and fantasy efficiency savings.”

Nominally, the total personnel employed by the British armed forces tops 190,000. But this is a gross figure — and a gross overstatement. The British army will actually be reduced to 72,500 troops by 2025, which defense analyst Jonathon Kitson likens to a capacity crowd at a mid-sized football stadium — and one hopelessly deficient in artillery too.

According to third party statistics, like those from the International Institute for Strategic Studies’ Military Balance 2022, Britain’s defense budget is still the third largest in the world. But, as numerous parliamentary investigations into military procurement have shown, including one in last December, it’s filled with waste and ineffective spending.

This is a numbers game, and across Europe, countries are increasing their defense spending. A total of 11 NATO members spent over 2 percent of their GDP on defense in 2021 — up from just three in 2014.

Germany, for example, announced a major boost in spending in February, with economically libertarian Finance Minister Christian Lindner chastising those who would worry about €100 billion in new debt. This was, he said, an investment in German freedom.

Such things are not said in Britain.

As Sweden and Finland are formally invited to join NATO, it’s worth examining not only the nature of Russian imperialism, but why they felt safe before | Maurizio Gambarini/EPA

Along these lines, as Sweden and Finland are now formally invited to join NATO, it’s worth examining not only the nature of Russian imperialism — which compelled them to do so — but also why they felt safe before.

Neutrality requires strong weapons and large numbers. The Finnish army calculates its reserve strength at roughly 900,000, and it has plans in place for the rapid arming and mobilization of a significant proportion of its adult population in case of invasion.

When Russian strategists lament the nature of the country’s war of attrition in Ukraine, they also do so through the prism of numbers.

Igor Girkin, alias Strelkov — a retired officer of the GRU internal security services and commander of Russian and allied forces in Donetsk and Luhansk from 2014 — regrets Russian insistence that this war is a “special military operation.” Because it is not a “war,” Russia has fought with an army at peacetime strength. Only mass mobilization, Girkin sobs, could match the Ukrainians’ ability to put a million men in the field.

A similar point was made by Mikhail Khodarenok, a former colonel who purportedly “went rogue” on a state TV talk show in May. Mobilization matters — it’s a numbers game.

But Britain’s army is small and decreasing in size; its navy is expensive but not expansive. And defending the home islands, while also conducting operations in the Indo-Pacific to cement the AUKUS alliance with Australia and the U.S. might require more than just two aircraft carriers, six destroyers, 12 frigates, nine submarines and Horatio Nelson’s preserved HMS Victory.

If Britain wished to match the Russian and Ukrainian images of its military significance, it would drastically increase its defense spending. It would also start planning less for war-on-terror conflicts — in which it’s been tactically defeated — and instead, focus on the sort of war that Ukraine and Russia are now fighting. A war in which artillery matters, numbers matter, and large swathes of the adult population might be required to serve

Emerging Europe at heart of ‘significant resurgence’ of Covid-19