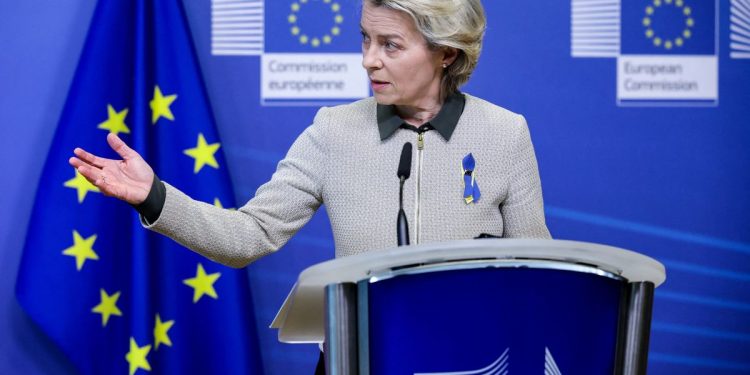 Von der Leyen travelled to Skopje, the capital of North Macedonia, to boost support for a French proposal designed to persuade Bulgaria to lift a veto on EU membership talks for its western neighbor.

“Many of you will be understandably frustrated that your country has not yet begun accession negotiations. Let me tell you: I am too,” she told the parliament of North Macedonia, which was meeting in special session to discuss the plan.

Backing for the French compromise could see the Commission start the screening process immediately, with accession negotiations starting “as soon as next week,” Von der Leyen said.

“We are convinced that this is of historic importance,” she stated. “But the decision is yours to take and yours alone.”

The French proposal is a hard sell. Many in North Macedonia says it makes too many concessions to Bulgaria.

Under the plan, North Macedonia must commit to changing its constitution in order to recognize a Bulgarian minority in the country and introduce other new measures to protect minority rights and banish hate speech on the basis of Bulgarian demands.

North Macedonia has been an EU candidate since 2005. It was obliged to change its name in 2018, from simply Macedonia, to overcome a Greek veto which had held up its progress toward joining the EU and NATO. It finally joined the military alliance in 2020.

The Socialist-led government of Prime Minister Dimitar Kovacevski backs the French proposal as a reasonable compromise. But opponents say it threatens North Macedonia’s national identity and makes too many concessions to Bulgaria’s claims that the country’s language and ethnicity are rooted in Bulgarian.

As von der Leyen spoke, thousands of protesters gathered outside parliament chanting slogans and holding banners reading “Ultimatum? NO, thanks.” Five people were detained, according to local police.

“There can be no doubt that the Macedonian language is your language,” she said, insisting the proposal respects national identity.

Inside the parliament, opposition lawmakers wore T-shirts emblazoned with the word  “No” in red letters.

Von der Leyen was briefly interrupted by whistles and shouts, while one member aggressively placed in front of her a paper reading “No.”

Protests against the deal have been held in Skopje almost on a daily basis since July 1, when the government announced it would support the deal. Many have turned violent.

A list of names and phone numbers of MPs from the ruling coalition was circulated on social media Wednesday, under the title: “tell them not to betray the people.” It urged citizens to call MPs and personally pressure them to vote against.

The vote is expected to follow the parliamentary debate which will continue Friday.

Complicating the process, the government has decided legislators will not directly vote for or against the French proposal. Instead, they will decide on conclusions adopted during the debate, which will also set down the country’s red lines in the EU integration process.

The ruling coalition’s thin majority in parliament should win the vote. But it will face a major hurdle with the revision of the constitution to officially recognize a Bulgarian minority, which requires a two-thirds majority in the assembly.

“The farce in the parliament might pass, but the change in constitution no,” said Hristijan Mickoski, leader of the main opposition VMRO DPMNE party.

‘They left us to die’: UK’s Afghan aid staff in hiding from Taliban