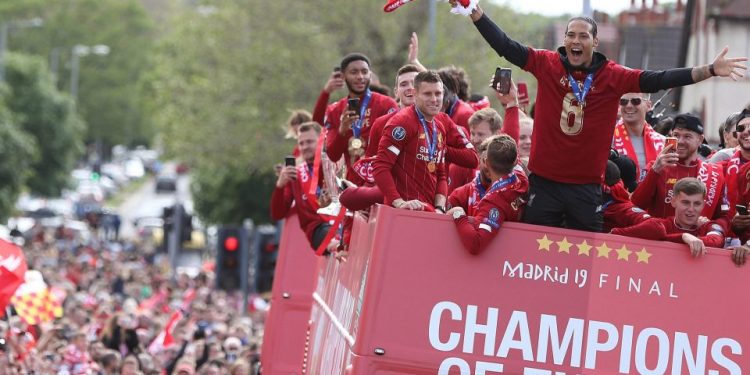 When Philippe Coutinho forced a move to Barcelona in January 2018, Jurgen Klopp’s restoration job at Liverpool looked to have hit a huge stumbling block.

Little did the manager know that the Brazil’s exit helped pave the way for the Reds to return to the big time and, finally, the of end the club’s long wait for Premier League glory, in part thanks to one key signing… Virgil van Dijk.

Coutinho had been in scintillating form in order to secure his dream move and, despite the club taking a step back with the Brazilian’s departure, they had unknowingly taken the biggest step forward just days before.

After a failed move during the summer of 2017, Van Dijk surprisingly held out for Liverpool despite interest from other top Premier League sides.

The deal and a move to Anfield finally became official four years ago, on December 27.

Still one of my best Christmas presents I’ve ever had https://t.co/LNITxPams2

Leaving Southampton for a record fee for a defender of £75million, Van Dijk came with huge expectations, and the future Ballon d’Or runner-up more than lived up to them.

Klopp was able to take the Reds to the next level with a Champions League final appearance the following summer, before winning the competition the next season in 2019.

European success has always held a special place at the Merseyside club and in the hearts of their fans, but the holy grail was then achieved in 2020 when Klopp guided Liverpool to a first ever Premier League title.

Van Dijk was the cornerstone of their defence and, remarkably, the Dutchman is yet to lose a league game at Anfield four years after becoming a Red.

Signing a new deal until 2025, van Dijk is undoubtedly a club legendGetty

Van Dijk has run out under the ‘This Is Anfield’ sign 55 times in the league since his arrival, and is yet to taste defeat, helping Liverpool compete for and lift a title that was unattainable for nearly three decades.

That’s the longest run of any Premier League player to have never lost a home game with their side, and just four games short of the longest home unbeaten run of anyone ever.

The 30-year-old was taken out of action for the remainder of the season last October when a collision with Everton’s Jordan Pickford ruptured his ACL.

Now back and shutting out top forwards across Europe, the Netherlands captain is set to return from a brief spell out with COVID-19 to help his side challenge once again for the grandest prizes the game has to offer.