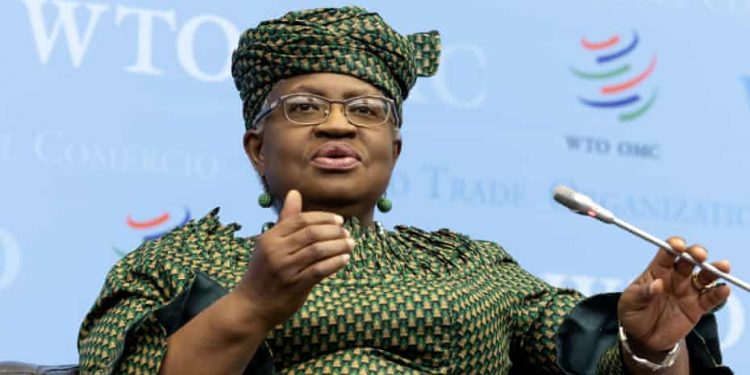 Rocketing global food prices as a result of the war in Ukraine could trigger riots from those going hungry in poor countries, the head of the World Trade Organization has said.

Ngozi Okonjo-Iweala warned food-producing countries against hoarding supplies and said it was vital to avoid a repeat of the Covid pandemic, when rich countries were able to secure for themselves the bulk of vaccines.

In an interview with the Guardian, the WTO director general expressed concern about the knock-on effects of Russia’s invasion – stressing the dependence of many African countries on food supplies from the Black Sea region.

“I think we should be very worried. The impact on food prices and hunger this year and next could be substantial. Food and energy are the two biggest items in the consumption baskets of poor people all over the world,” Okonjo-Iweala said.

Okonjo-Iweala, a former Nigerian finance minister, said 35 African countries were dependent on food imported from the Black Sea region, adding that Russia and Ukraine were responsible for 24% of global supplies of wheat.

Agriculture has always been a vexed issue at the WTO, with continual rows about governments subsidising their own farmers while restricting access to their markets. “Discussions are pretty heated. They are always heated because these are huge issues,” she said.

Okonjo-Iweala has just completed her first year as head of the WTO, having been appointed to provide some political impetus to an institution beset by disputes over how to liberalise trade and the mechanism for settling disputes.

The WTO director general said progress was being made but admitted: “Since I got here things have been quite tough. It is not an easy job.”

After being strongly critical of the “vaccine apartheid” that affected Africa during the pandemic, she said WTO member states had to resist the temptation of protecting their own food stocks.

“It is a natural reaction to keep what you have – we saw that with vaccines. But we shouldn’t make the same mistake with food.”

The WTO estimates 40% of the increase in global wheat prices during the food crisis of a decade ago was the result of hoarding.

Only 12 countries currently have trade restrictions on food in place, Okonjo-Iweala said, including El Salvador, Cambodia and Egypt. “Other countries are trying to do things that are positive and we should learn from their best practice.

“We must make sure we learn the lessons from vaccines and previous food crises. I am not sure we can fully mitigate the impact of the war in Ukraine because the numbers involved are huge, but we can mitigate some of it.”

The WTO director-general said she was worried Ukraine’s planting season would be disrupted by the conflict and that supplies of fertiliser would also be limited.

Ukraine typically provides half the wheat to the World Food Programme, the UN agency that provides emergency supplies to countries in conflict or experiencing natural disasters such as famines.

“If we don’t think about how to mitigate the impact of the war that will be another catastrophe not just this year but next year,” she said.

There was a danger of a repeat of the food riots that marked a previous period of rapidly rising prices in the late 2000s, she added. “We are talking to our members and urging them not to compound this crisis by having export restrictions on food.”

Russia and Ukraine are among the 164 members of the WTO, a body founded on the idea that trade would lead to greater prosperity and peace.

“This model has delivered for years and lifted people out of poverty” Okonjo-Iweala said. “The war doesn’t undermine the fact that trade can help build resilience and achieve peace.”

Countries including the US, the UK, Canada and the 27 countries of the EU have imposed tariffs on Russia by removing its most-favoured country status, a WTO rule that means the same trade terms should be offered to all member states.

Okonjo-Iweala said she could not envisage Russia being thrown out of the WTO because the process would be complicated, convoluted and require 75% of members to approve.

12 elections to watch in emerging Europe next year