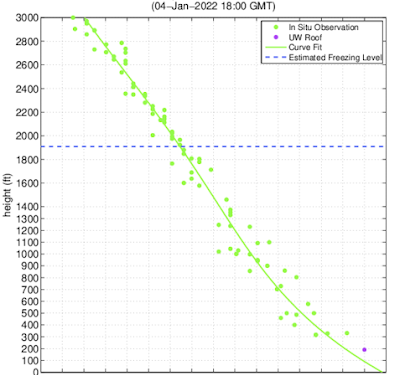 It might seem ironic….the approach of a warm front can produce substantial snow over the lowlands of western Washington and in our mountains.

And such an event is predicted to occur later tomorrow, with Northwest Washington particularly vulnerable to both snow and freezing rain.  The mountains will also get hit hard with several feet of snow.

The freezing level over Puget Sound is now at roughly 1900 ft right (see a plot of temperatures from planes coming in and out of Sea-Tac Airport.  The snow level is about 1000 ft below that (snow melts between the freezing and snow levels, below the snow level only rain is observed)

Where precipitation is heavy, the snow and freezing levels can descend hundreds of feet as a result of melting snow.

A weak system is moving in today, resulting in rain over the lowlands with one exception:  around Bellingham where cool flow out of the Fraser River Valley will develop this afternoon and evening.

The snowfall prediction from the very high-resolution UW weather model for the period ending 4 AM Wednesday is shown below.   Decent snow in the mountains (around 6 inches) and a few inches over NW Washington.  Cold eastern Washington will be all snow.

A very well-defined warm front will approach on Wednesday……unusually strong for our region.   Below is the forecast sea level pressure, surface winds, and 800-m temperatures (colors) for Wednesday evening at 7 PM.    The red line indicates the warm front.   The front is associated with low pressure (a trough) and there is a large temperature change on its northern side.

Cool air (blue) is over the land and you will note a huge pressure difference (gradient) over the Cascades, with higher pressure to the east.  This pressure gradient will force easterly winds in the passes and cool, NE winds out of the Fraser River Valley.

That is going to be important.

The strong warm front will be associated with heavy precipitation that will further cool the air over land by melting, driving the snow level to near the surface.   Snow will be falling everywhere, but the warming will turn the snow into rain rapidly over the western lowlands except for NW Washington.

Below is the forecast snowfall (NOT SNOW DEPTH) for the 24-h encompassing the front passage (ending 4 AM Thursday).

Wow.  The western slopes of the Cascades and Olympics get hit hard. Snow everywhere!  Plenty of snow over eastern Washington where it stays cold.  A few inches over Puget Sound.

Most of this will be overnight in the west and snow will be wet and much will melt quickly on the warm ground.  And as the warm front moves through, overnight temperatures will SOAR into the 40s across the west, except for those poor folks in NW Washington, where 4-6 inches could fall in places.

To illustrate the temperature changes, below are the predicted temperatures at 10 AM Wednesday.   Cold in eastern Washington and cool in the west (blues are below freezing).  You can see the cool air coming out of the Fraser River Valley across Bellingham and the San Juans.

One day later, temperatures have surged in the west (yellows are in the upper 40s).  Eastern Washington stays cool.  Sections of NW Washington stay cool.

So expect lots of weather action later tomorrow…with heavy precipitation, lots of mountain snow, light snow over the lowlands that melts rapidly.  More snow over NW Washington. Winds will be strong and gusty over NW Washington….and strong winds will hit the coast as the warm front moves through.