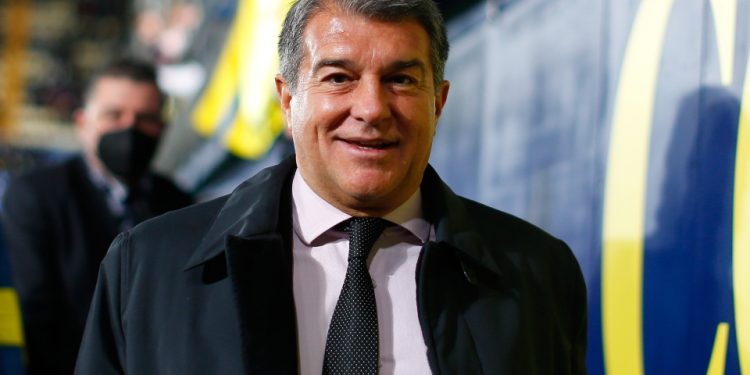 Joan Laporta claims that the ‘world should get ready’ for big money transfers as the Barcelona president talkd about the prospect of signing Erling Haaland and other major arrivals.

But as he states that the club are able to sign big players again in the coming months, their most recent signing, former Man City forward Ferran Torres cannot play for the Catalonians until their wage bill is brought down.

Laporta appears to be upbeat over the future of BarcaGetty

It’s quite a turnaround for the club given the predicament they were in earlier this season in which saw Laporta outline Barca’s financial state.

The 59-year-old revealed in August 2021 that the Catalonians had debts of over €1.35billion (£1.13bn) and were forced to lose club legend Lionel Messi on a free transfer.

However, they have been able to secure the signing of former Man City man Torres and now look set to be competing with their rivals for the signature’s of the world’s best players.

“Everybody should get ready, as we are back as big players in the market,” he said at Torres’ presentation conference.

Whilst he appears buoyant over new signings, Laporta did not want to discuss the Borussia Dortmund star Haaland specifically but crucially did not rule out the transfer.

“You will allow me not to talk directly about players because it does not benefit us, all it does is increase their value,” he said.

It remains to be seen if Haaland will be playing for the Catalonian giants next season, but his €75million (£63m) release clause does become active, making him more affordable.

The reason for the possibility of signing players again comes after the club secured a bank loan as well as sorting out some of their short-term debts.

However, LaLiga’s salary rules mean that the club cannot use Torres unless they they reduce them.

Manager Xavi told Goal that if the club can get Ousmane Dembele to agree to a salary reduction then they will be able to register the Spaniard.

Alongside convincing the Frenchman to agree to a lower wage, former Liverpool playmaker Phillipe Coutinho could also be sold to free up cash with Tottenham and Arsenal both reportedly interested in his services.

“We’ll see how the salary cap situation is, if it’s possible right away. There has to be players leaving,” he said.

“If we get Dembele to re-sign his contract and lower his pay it will allow us to sign Torres and we hope that it can happen.”

Blue carbon: the hidden CO2 sink that pioneers say could save the planet