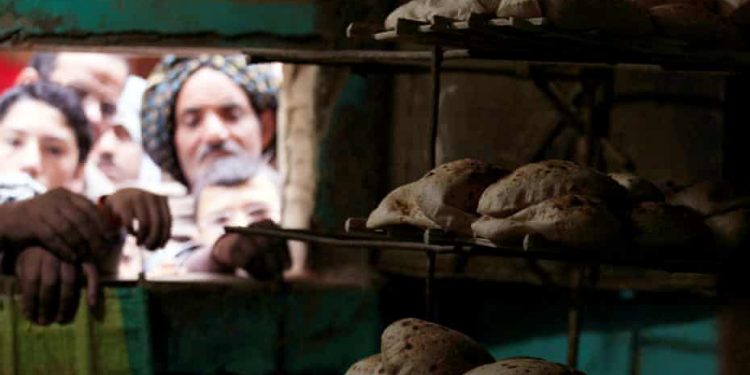 Concerns are growing across the Middle East and north Africa that the war in Ukraine will send prices of staple foods soaring as wheat supplies are hit, potentially fuelling unrest. Russia and Ukraine supply a quarter of the world’s wheat exports, while Egypt is the world’s biggest importer of wheat.

In Tunisia, like many people queueing for bread in Tunis’s sprawling medina, or old town, Khmaes Ammani, a day labourer, said the rising cost of living was leaving him squeezed. “There’s never any money at the end of the month,” he said. “I even have to borrow some. Everything is getting more expensive.”

Nearly half of Tunisia’s wheat imports come from Ukraine, and the Russian invasion has sent prices to a 14-year high. Even though the Tunisian state controls the price of bread, people fear they will inevitably feel the crunch.

“If the price of bread goes up, it’ll mean cutbacks elsewhere,” said Ammani. “We need the bread.”

Tunisia is highly vulnerable to such aftershocks, with a fragile economy battered in recent years by inflation and high unemployment, and saddled with large amounts of public debt. But it is far from the only country in the Middle East and north Africa that would face difficulties in the event of prolonged supply-chain disruption and price hikes.

Yemen, which has itself has been ravaged by war since 2014, imports almost all its wheat, with more than a third coming from Russia and Ukraine. It is highly dependent on bread, which is thought to make up over half of the calorie intake for the average household.

Lebanon, a country in the grips of economic crisis with inflation at a record high, usually imports more than half of its wheat from Ukraine. Last Friday, the economy and trade minister, Amin Salam, was reported as saying the country had enough wheat for “a month, or a month and a half”. The government was talking to other suppliers, he added, including the US, “who have expressed their willingness to help if we needed to import large quantities of wheat”.

Abeer Etefa, a World Food Programme spokesperson based in Cairo, said many of the commodities already affected by the Russian invasion were “of particular importance” to the Middle East and north Africa. But sourcing grain from other exporters was not easy, she warned.

“There is a surplus in the global production of wheat this year, but if you look at where the wheat will be coming from, it means a longer lead time and higher transportation costs [than from Ukraine],” she said.

In Egypt, where flatbread is a staple food, much of the wheat comes from Russia and Ukraine. Even before the invasion, with prices having risen by 80% between April 2020 and December 2021, the government said it planned to raise the cost of heavily subsidised bread for the first time in decades after President Abdel-Fattah El-Sisi said: “I cannot provide 20 loaves of bread at the cost of one cigarette.”

The Egyptian prime minister, Mostafa Madbouly, said the government would “ensure that the neediest people are not harmed”, but gave no more details. In Lebanon, which also subsidises bread, Salam warned that the central bank would not be able to keep pace if prices continued to rise.

In a region with a long history of political and social unrest provoked by worsening economic conditions, particularly unaffordable food prices, the risks are clear. Etefa said the global outlook was worrying.

Rama Hansraj, Save the Children’s director in Yemen, warned of a global “ripple effect” that could unleash “additional horrors” in other vulnerable countries.

“In Yemen, 8 million children are already on the brink of famine. Families are exhausted. They’ve faced horror after horror through seven years of war. We fear they will not be able to endure another shock, especially to the main ingredient keeping their children alive,” she said.

Tunisia’s government remains tightlipped on the flour shortages, even though the evidence is already apparent. Across the country, bakeries are shutting early, or rationing supplies, with anger growing among owners.

“There’s been a problem building for months,” said Hazem Bouanani, a baker. “Normally, we buy flour from mills and the government will reimburse us. For 10 months, we haven’t seen any payment.”

Habib Awaida, at the 80-year-old Sabbat bakery, was stoic, declaring that “even if we can’t find bread, we’ll eat something else.” He added, however, that it was up to the government to reduce Tunisia’s reliance on imports. “We should really think about investing in our own wheat,” he said.

Sign up for a different view with our Global Dispatch newsletter – a roundup of our top stories from around the world, recommended reads, and thoughts from our team on key development and human rights issues, delivered to your inbox every two weeks:

A lucky guess? Learn the science of ozone depletion with NOAA and NASA