‘We’ve heard it all before’: Ukrainians brush aside talk of Russian invasion 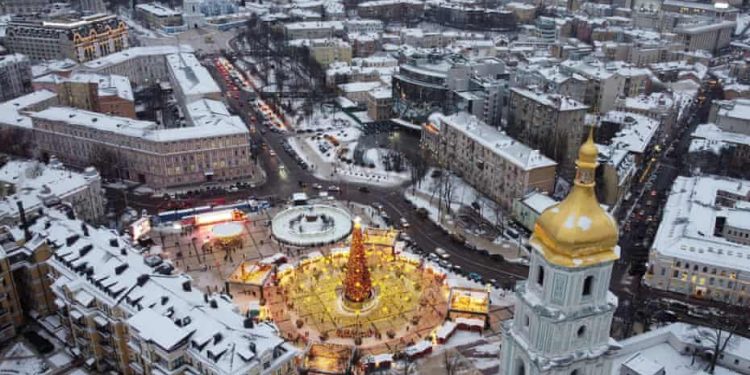 Russia is threatening war on Ukraine, but in Kyiv the city council is putting up Christmas trees rather than bomb shelter notices, and organising concerts rather than army recruitment drives.

Amid a Russian military buildup on Ukraine’s eastern border and in annexed Crimea, hostile rhetoric between Russia and the US and its allies is edging towards a cold war high, with Ukraine the battlefield for any actual fighting. Ukrainians, however, just emerging from Covid quarantine, are enjoying ice rinks and markets put up for the holiday season and would rather think about how to celebrate the coming new year.

“I’m going to spend New Year with family and friends at home, although I’m sure there will be lots of parties in Kyiv,” said Olya Simbirova, 25, who works in a hairdressing salon in the centre of the capital. “In my circle of friends, no one is talking about a war.”

Kyiv is over 700km from the frontline, although some reports suggest Russia, after moving troops into Belarus, may encircle the capital along with other large cities to the east of the city, or use targeted airstrikes. But it is thought to be more likely that eastern and southern areas nearer the frontline will be a target, with Kyiv having to deal with interrupted supplies and communications, as well as Russian sabotage and increased cyber and information warfare.

Although a nationwide poll published on 17 December by Kyiv International Institute of Sociology found that half of Ukrainians would resist a Russian invasion by taking up arms or through civil resistance, not many believe they will be called on to do so, or are rushing to prepare. After losing swaths of territory to Russia and Russian-backed forces in 2014, and enduring a simmering armed conflict in east Ukraine ever since, not to mention economic hardship and the impact of Covid, many Ukrainians are so inured to threatened disaster they no longer believe politicians and media who, they say, have cried wolf too often.

“We’ve heard it all too many times over the last few years,” said Simbirova. “And usually it’s just hype.”

Earlier this year the Russian troop buildup on the border began to invoke the spectre of impending invasion, inspiring Simbirova’s mother to announce she was moving to Spain to be safe. The invasion came to nothing at that point, and her mother stayed in Ukraine. More recently, at a November press conference, the Ukrainian president, Volodymyr Zelenskiy, devoted as much time to talking about an alleged 1 December coup plot as he did to Russian invasion. The coup never happened, and many hope the invasion will be similarly chimeric.

An international development project in Kyiv recently circulated recommendations among staff for what to do in case of invasion, such as to have a suitcase packed and to check the location of the nearest bomb shelter. But Yevheniya Burdiyan, who works as an accountant, has not heeded the advice.

“I haven’t packed a suitcase,” Burdiyan said. “Because I didn’t pack one back then either.” Burdiyan, 49, is from Donetsk in east Ukraine, now under de facto Russian control after fierce fighting in 2014-15. Seven years ago, unable to believe in a war that was already raging, she was the last in her street to tape over her windows against shelling. She left the city in July 2014 on the last train out before the railway line was destroyed.

Now she lives in a small settlement just outside Kyiv, built by families similarly displaced from east Ukraine. She says she is too busy to think about another possible war, and her neighbours never discuss it either.

“After Donetsk and all the pain we went through, now we live in a little world of family, home, repairs. I’m just happy if I can buy some shelves, because when we moved in we just had bare walls,” she said. “Life goes on and we have to live it, with these little pleasures, and war is somewhere there, in the subconscious.”

In Mariupol, 20km from the frontline of the east Ukraine conflict and a likely target of any possible invasion, many residents are also largely ignoring the threat and the council has gone all out on seasonal decorations and events.

“They’re planning lots of concerts. City hall is trying to make Mariupol an example of security and cultural development of Ukrainian towns, in contrast to towns on the other side of the frontline,” said Galyna Balabanova, an activist and project manager in Mariupol.

Alongside developing military capacity, one of Ukraine’s strategies to counter the Russian threat is to develop cities such as Mariupol so as to win the “hearts and minds” of Ukrainians sympathetic to – or still living in territory de facto controlled by – Russia.

Balabanova and her friends are following the news and trying to analyse where Russia might attack, but they are not worried. “We trust in our army and our volunteers,” she said.

As Ukrainians continue to focus on the near and dear, Burdiyan knows she cannot influence events anyway. “What we want and what happens are two different things; it doesn’t depend on us,” she said. Meanwhile, she does have something immediate to plan for. Her daughter, who lives in Estonia, is coming home for the holidays.