‘What have we become?’ – Harry Kane, Jordan Henderson and Declan Rice leap to defence of England teammate Harry Maguire after Manchester United defender booed by fans 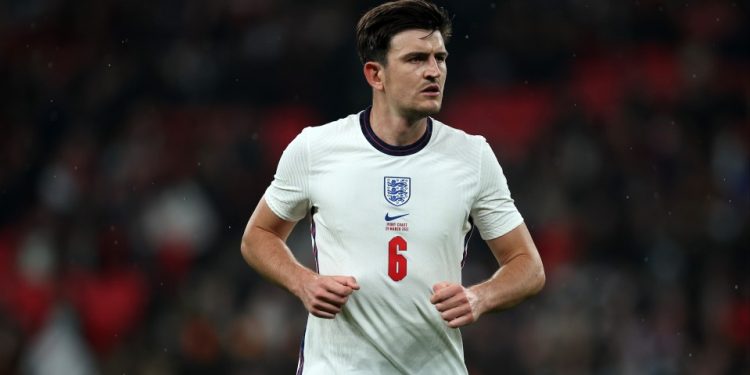 England stars Harry Kane, Jordan Henderson and Declan Rice leapt to the defence of teammate Harry Maguire after a section of fans booed him during the 3-0 win over the Ivory Coast on Tuesday night.

A routine friendly victory was soured somewhat by the reaction of the crowd at Wembley to the Manchester United defender.

There was a smattering of boos when his name was read out over the tannoy, while he was even jeered after his first few touches of the ball.

Three Lions boss Gareth Southgate labelled the reaction an ‘absolute joke’, while his teammates also posted about their dismay.

“I can’t get my head around what happened at Wembley tonight,” said Liverpool midfielder Henderson. “Harry Maguire has been a colossus for England. Without him, the progress made at the last two tournaments would not have been possible.

“To be booed at his home stadium, for no reason? What have we become? What happened tonight was just wrong. As someone who wants to win with England, I feel fortunate to share a dressing room with him. We all feel the same!”

West Ham star Rice also took to social media to express his dismay at the reaction to his teammate.

“Total embarrassment from whoever boo’d tonight,” Rice said on Twitter. “@HarryMaguire93 has been incredible every single time he’s put on the England shirt. Absolute nonsense now it’s becoming. Back your own players. Especially with a Major tournament coming up.”

Henderson didn’t understand the reaction and defended his teammate on social mediaIG: @JHenderson

Ronaldo, Mane and Lewandowski reach World Cup, but no Salah, Mahrez and Zlatan

Total embarrassment from whoever boo’d tonight. @HarryMaguire93 has been incredible every single time he’s put on the England shirt. Absolute nonsense now it’s becoming. Back your own players. Especially with a Major tournament coming up. https://t.co/OdqM9F0Uw8

Meanwhile, Three Lions captain Harry Kane tweeted: “We’ve worked hard to rebuild our connection with @England fans in the last few years so to hear @HarryMaguire93 booed at Wembley before kick off was just not right.

“The fact that he’s been brilliant on the pitch and given us all so many great memories makes it even harder to understand. He doesn’t deserve that reception. He’s got full support in the changing room and should have the same from every England fan.”

Maguire has been struggling for form at Manchester United, as have a number of players at the club, and went viral this week for a training clip where fans poked fun of how he seemingly did not understand how to play a game of rondo.

talkSPORT host Ally McCoist could not understand why fans had this reaction to the defender, especially when his performances for the national team have never come into question.

“I really cannot get my head around it. It’s bizarre,” McCoist told Breakfast. “I don’t know exactly why he’s become this figure that a section of the England support start booing.

“He’s never let England down, far from it. In fact, the complete opposite.

“I think the vast majority are intelligent people, I include myself in those bizarrely, think England are a better team with Harry Maguire in it. They are.

“Whether it’s a four, preferably, or with three centre-backs, they are a better team. He’s never let them down, he’s done well.

“In the last two major tournaments, England have got to a World Cup semi-final and got beaten in the final of the Euros on penalties and they are booing him.

“To be brutally honest with you, it says more about the people who are booing him. They should start behaving like football supporters and get behind a player when he needs them.

“Maybe Harry Maguire is having a tough time, he certainly is at United, as are some of the other United players. I tell you what you should maybe do, try supporting him when he needs you.

“It’s a two-way thing. It’s staggering we are talking about this this morning.

“Gareth must be thinking ‘what is going on here?’ Another good performance with some great goals, and we are sitting here talking about the crowd booing Harry Maguire.”

Sky Bet: Place any bet and get £30 in free bets – CLAIM HERE